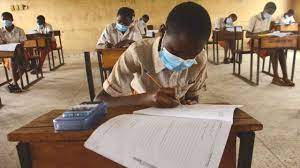 The Council says its investigations have uncovered that extracts of the 2021 Elective Mathematics and English Language tests, had been found in the public domain.

WAEC made this revelation at a news conference on Wednesday in Accra.

Addressing stakeholders, Head of Test Administration at WAEC, George Ohene-Mantey, said portions of the papers were found to have been circulated before the examination as “the ‘cheating’ social media groups were in full swing.”

“After the administration of the tests, careful scrutiny of the several versions received indicates extracts of parts of the questions for Mathematics (Elective) 2 and Section ‘A’ of English Language 2 were circulated on some social media platforms,” he said.

The tests were subsequently written on September 9 and 13, respectively.

The sub-regional examination management body indicated that its “monitoring revealed that the circulation of numerous versions, both printed and handwritten on most of the groups earlier,” the Council further explained in a statement.

WAEC says though earlier reports suggested that the circulation was not extensive, they are deploying “various internationally accepted assessment procedures and interventions within its domain to guarantee the credibility of results.”

Other misconducts observed during the examinations so far include, “Inside examination hall malpractices and invigilation, institutionalised examination malpractices, that is the execution of pre-arranged plans to assist candidates in cheating, by solving questions and distributing solutions to candidates.”

According to Mr Ohene-Mantey, the rest are, “smuggling of mobile phones into examination halls awaiting solutions from platforms they have made payments to.”