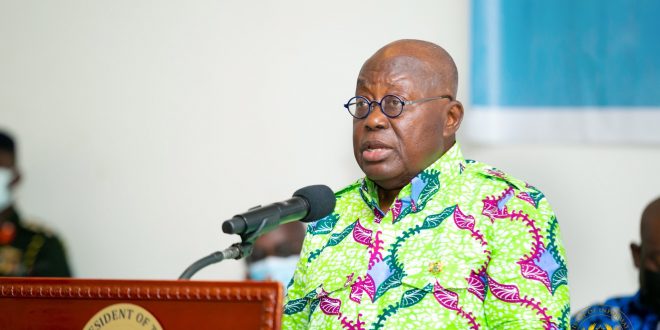 President Akufo-Addo is leading the country’s delegation to the World Leaders’ Summit of the United Nations (UN) Climate Change Conference (COP 26), being held from 31st October to 3rd November, 2021 in Glasgow, Scotland.

The COP 26 Summit, which is one of the largest gatherings of world leaders, will bring parties together to accelerate action towards the goals of the Paris Agreement and the UN Framework Convention on Climate Change.

The President, who left Accra on October 31, will deliver a statement on Ghana’s position on Climate Change as well as measures put in place to combat the threat it poses.

He will also deliver three (3) separate statements on efforts Ghana is making to protect her forests and ocean, and participate in the Africa Adaptation Acceleration Summit, being held on the sidelines of COP 26.

The President will return to Ghana on Thursday, 4th November 2021. In his absence, the Vice President, Alhaji Dr Mahamudu Bawumia, shall, in accordance with Article 60(8) of the 1992 Constitution, act in his stead.

I'm Adwenpa-Hene |Blogger & Broadcaster Journalist. I am the CEO and manager of this noble website. I publish on Entertainment, Sports, Politics, Lifestyle, and Technology. You can also follow Us on : YouTube Channel - My Ghana Media TV, Facebook - MyghanaMedia TV , Twitter - @MyGhanamedia2 & Instagram - My Ghana Media TV. Email Address: myghanamedia@gmail.com Contact Us: 0200818719
@@MyGhanamedia2
Previous Walewale-Bolgatanga Crash: Another Police Officer Dies After Gory Incident
Next I’m Unable To Release Francis-Xavoer Sosu To You – Speaker To Police