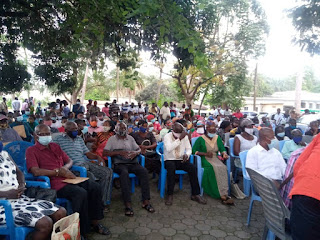 The Coalition of Affected Savings and Loans Customers (CASLOC) has showed their discomfort to the ruling government led by Nana Addo for delaying to pay their locked up funds which has been deposited of the collapsed 23 savings and Loans, 347 microfinance companies and the 39 mico -credit institutions whose licenses were revoked by the bank of Ghana.

Speaking to Myghanamedia.com at a press conference held in Ashanti Region, they lamented that over 4.6 million people who were been affected, the government has paid  1.7 million people which representing only 13% of our population but not the 96%  or 98% that they are claiming and over 3 million people were not received our money.

The secretary of CASLOC, Mr Ezekiel Annor Akagbo said they are not happy about how the government is paying their money slowly and that clean up exercise of banks has contributed to the kind of hardships to so many people in the country.

He also added that, they have observed that same as the issue of DKM and the likes, which involved less than 100,000 customers could send the NDC into opposition in the December 7,2016 general elections, likewise can this financial Sector clean up exercise, which involves over 4.6 customers also send the NPP into opposition in the upcoming 2020 general elections.

Meanwhile, some of the affected customers also expressed their displeasure to the government.

I'm Adwenpa-Hene |Blogger & Broadcaster Journalist. I am the CEO and manager of this noble website. I publish on Entertainment, Sports, Politics, Lifestyle, and Technology. You can also follow Us on : YouTube Channel - My Ghana Media TV, Facebook - MyghanaMedia TV , Twitter - @MyGhanamedia2 & Instagram - My Ghana Media TV. Email Address: [email protected] Contact Us: 0200818719
@@MyGhanamedia2
Previous You Will Be Jail; If You Are Found Guilty Of The Untimely Deaths – Police Commander Warns Residence Of Apire.
Next Residents Of Amakyebare ‘Cry’ Over Deplorable Road.