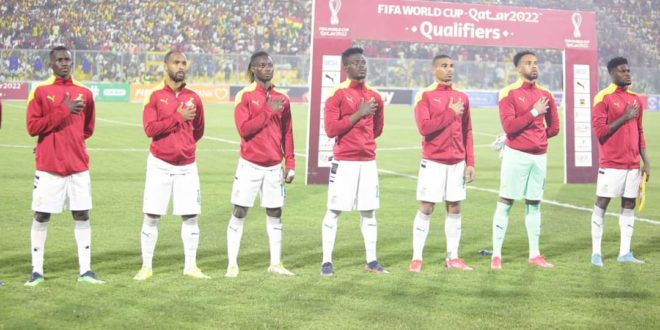 Nigeria’s Super Eagles managed to hold the Black Stars to a pulsating 0-0 drawn game at the Baba Yara Sports Stadium in Kumasi in the 2022 FIFA World Cup qualifying duel.

Otto Addo’s men needed a little bit more precision in attack as AS Roma starlet worked tirelessly throughout the 82 minutes he lasted on the field of play.

Kudus Mohammed constantly raided the Nigerian backline in search of the carving goal but, Leon Balogun and William Troost-Ekong held him at bay.

Ghana Sports Online editor AKYEREKO runs the rule over the performance of the Black Stars at the Baba Yara Sports Stadium.

The Swindon Town goalkeeper had to be at his best to deny Simon Moses a good chance in the 56th minute as the Super Eagles came close with a decent chance. The fourth division goalkeeper didn’t experience too many difficult moments in the game partly due to his organisation of the backline.

Debut appearance for the West African powerful against a difficult side. The ex-Fulham defender did the simple things on the field of play and won the day over Samuel Chukwueze on the left side of the Nigerian attack.

The Bordeaux defender committed a number of elementary errors during the two departments of the game – especially offensively. His pull-outs and cut-backs both didn’t make any impact in the game.

As he has always done, the Strasbourg defender got booked in the 62nd minute during an incident when Victor Osimhen forced him to handle the ball in a vital zone. Aside from that, he was towering and vigilant. He had a good came with Amartey.

The Leicester defender played perhaps one of his best games in the Black Stars jersey. He single-handedly shut out Napoli’s Victor Osimhen from the game. He enjoyed the backline controlled the Nigerian attacking trio of Chukwueze, Kelechi, and Osimhen.

Blowing cold and hot – with Nigeria doing more of wing play, the Arsenal midfielder was expected to boss the central midfield area but, most times he had Joe Aribo, No. 10, to contend with. He dispatched two decent passes but, also a calamitous error from him on the 56th-minute mark nearly led to the opening goal of the game.

The Real Mallorca man worked all night with good runs, good energy, and intelligent Spanish-cultured midfield play. He did more destroying as well as distribution – doubling up his vigilance in the middle.

He enjoyed isolated moments of quality and greatness. The Sporting CP youngster unleashed a fierce drive in the 37th minute from a Felix Afena-Gyan squared pass. He was replaced by Osman Bukari with 11 minutes left to go.

Booed by the fans when he was being replaced by Holstein Kiel forward Okyere Kwasi Wriedt in the 92nd minute. Once again, he failed to play with the team in attack. He operated more on the wings but failed to rely on his teammates for team play which caused him to lose most of his final balls.

What a display from the Ajax Amsterdam man! Superb display. He was quick, blazing, fearless, and awesome with his nimble foot. His mazy runs caused more problems for the Nigerian midfield.

What a prospect! Incredible energy from the AS Roma starlet. He showed good blocking and telepathy with the rest of the attackers. Squared a good pass for Issahaku which nearly resulted in the opening goal. A potential replacement for Asamoah Gyan.