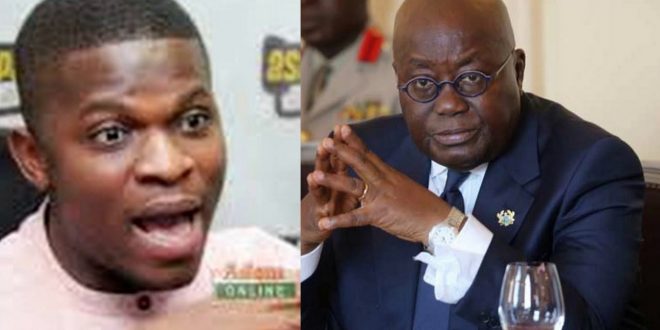 ‘Akufo-Addo Is The Biggest Promoter Of Corruption’ – Sammy Gyamfi

National Communications Officer of the National Democratic Congress (NDC), Sammy Gyamfi, has accused President Akufo-Addo of being the biggest enabler of corruption Ghana has ever had.

His comment follows President Akufo-Addo’s assertion that all allegations of corruption leveled against his appointees so far, have been probed.

Speaking on Top Story on Friday, December 10, 2021, Sammy Gyamfi said President Akufo-Addo has not shown positive attitude towards addressing corruption in the country.

“Whether or not President Akufo-Addo is not the clearing agent of corruption does not lie in his mouth. It has to do with his conduct, as it is said, action speaks louder than words and so what can the good people of Ghana reasonably infer or deduce from the conduct of President Akufo-Addo that is what matters. It is not about coming out to say I am not a clearing agent of corruption.

It is about what your conduct says, it is about how you handle corruption matters and scandals and the kind of signals that is sent to the populace. And if you look at the countless cases of corruption we have witnessed under President Akufo-Addo and how same have been handled by him, you cannot but come to the inevitable conclusion that President Akufo-Addo is the chief corruption clearing agent. He is the mother serpent of corruption as Martin Amidu told us and he is the biggest enabler and promoter of corruption ever that we have had in this country,” he said.

Citing many corruption scandals such as the PPA scandal, the SSNIT scandal, the ‘Cocoa Nti’ scandal among others under the Akufo-Addo administration, Sammy Gyamfi indicated that the government has failed in fighting corruption in Ghana.

If his Attorney-General and Minister of Justice had prosecuted former appointees of the erstwhile NDC regime, why can’t they prosecute his own appointees who have been found by independent constitutional and investigative bodies to have engaged in corruption,” he added.

Reacting to the comments by Sammy Gyamfi, the Director of Communications of the NPP, Yaw Buaben Asamoa said the country must build a resilient institution to fight against corruption in the long term and not leave the menace into the hands of presidents.

He noted that independent institutions mandated by the Constitution to fight corruption must step up and deal with the canker.

“We shouldn’t leave this in the hands of presidents, we should build a system that is resilient that serves us over the long term, and the institutions vested with the authority and power to fight corruption must step up and deal with this canker once and for all because they have the freedom, they are free to do so particularly the Office of the Special Prosecutor.

The President doesn’t investigate allegations. The President has established the most important corruption agency in Sub-Saharan Africa and an entirely independent agency, the office of the Special Prosecutor. The first occupant of that office was an NDC affiliated person, what more could the President have exhibited by way of political will and yet Martin Amidu true to his nature, the nature that he used to distance himself from his own party, distanced himself from the powers of his office and he didn’t execute those powers. That institution that Nana Addo has set up will grow to combat corruption,” he noted.

See also  Finance Ministry Replies Minority: GHS600M For Agenda 111 Yet To Be Disbursed

“That is the job of the courts,” he said.

Listen to the audio below for more details:
[Download]