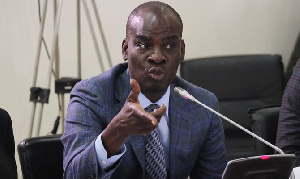 Minority Leader, Haruna Iddrisu has taken a strong exception to the dismissal of his motion by the Acting Speaker of Parliament, Joseph Osei-Owusu, by describing the latter’s decision as “abuse of discretionary power”.

Mr Osei-Owusu, who is the First Deputy Speaker, had refused the motion by the Tamale South Member of Parliament to overturn his own ruling of admitting a rejected motion on the 2022 budget statement and government’s economic policy.

Haruna Iddrisu himself had led the Minority to cause the motion by Minister of Finance Ken Ofori-Atta to be lost. Speaker Alban Sumana Kingsford Bagbin was then presiding over proceedings.

But five days later after the Speaker had left for Dubai for a medical review, the Majority with Mr Osei-Owusu in the Speaker’s chair, admitted the motion and, in effect, approved the 2022 budget.

But Haruna Iddrisu sought to overturn that decision with his motion, which was refused in a letter signed by Clerk to Parliament, Cyril Nsiah.

But on Monday, the Minority Leader also had a reply for the First Deputy Speaker.

“Kindly take note that the NDC Minority Caucus which I lead and my good self vehemently disagree with your position on the motion and your conduct in this matter.

“We take the strong view that your conduct affronts Orders 79, 81, 82, and 90 of our Standing Orders and can no longer be tolerated.

“In that regard, we are resolved to pursue this matter further with the Right Honourable Speaker upon his return.”