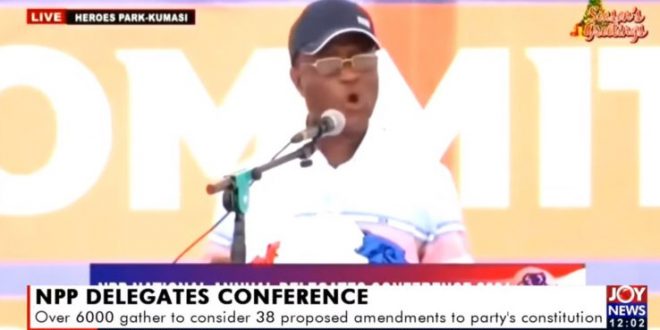 He believes the selection process does not necessarily have to be by an election, which he said “has often time turned acrimonious.”

Mr Kyei-Mensah-Bonsu bemoaned the attempt by some elements within the NPP to remove incumbent MPs, including first-time legislatures.

The Majority Leader said such negative activities distract the focus of MPs and negatively affect their attendance in Parliament which turns out to impact the transaction of government business.

“The National Party should own the process of selecting candidates to avoid any derailment in the forward march of the party. In this regard, I want to propose to the party that the constituencies should be encouraged to the largest extent possible to adopt the incumbent MPs for the purpose of the next general elections as any free-for-all election that is not guided or guarded will take over our great party,” he said.

The Minister for Parliamentary Affairs made these comments at the NPP National Delegates Conference held in the Ashanti Region.

The Party is expected to consider about 38 proposed amendments to the party’s constitution while considering several issues aimed at helping the NPP to win the 2024 presidential election and break the eight-year jinx.

Mr Kyei-Mensah-Bonsu indicated that the inability of the Party to protect the very experienced and astute MPs is unhealthy to the growth and development of the NPP.

The New Patriotic Party lost 28 seats to the National Democratic Congress (NDC) in the 2020 General Elections.

Twenty-one of them are either ministers, ministers of state or deputy ministers.

That is aside from the 41 who lost the NPP primaries ahead of the parliamentary polls.

In total, the NPP lost 92 MPs out of their 137 in the current Parliament.

He further said that the Parliamentary Party currently is at its brink, and if the 2023 Parliamentary Primaries is not handled well may spell doom for the party.

According to him, although Article 55 of the 1992 constitution dictates that the internal organisation of political parties shall conform to democratic principles, the same constitution does not bar the NPP from choosing its members of the National Executive Committee.

The Suame MP added that the NPP’s internal elections have created factionalism and tore the party apart over the years.

He urged the party to explore other means to which parties in more established democracies resort, including consensus, acclamation, persuasion, and even rotations.

I'm Adwenpa-Hene |Blogger & Broadcaster Journalist. I am the CEO and manager of this noble website. I publish on Entertainment, Sports, Politics, Lifestyle, and Technology. You can also follow Us on : YouTube Channel - My Ghana Media TV, Facebook - MyghanaMedia TV , Twitter - @MyGhanamedia2 & Instagram - My Ghana Media TV. Email Address: [email protected] Contact Us: 0200818719
@@MyGhanamedia2
Previous Premium Should Be On Governance Than Winning Next Election As The Incumbent – Abu Jinapor
Next Ghanaians Are Suffering; Abandon 1.75% E-levy – NDC Tells NPP At Delegates Conference