Breaking News
Home / POLITICS / Let’s Focus On Taking Down NDC Instead Of Each Other – Dr. Bawumia 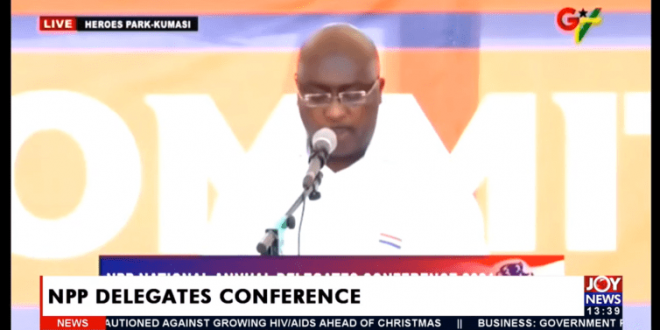 Let’s Focus On Taking Down NDC Instead Of Each Other – Dr. Bawumia

The Vice President, Mahamudu Bawumia has called on supporters of the governing New Patriotic Party (NPP) to be united as the party prepares itself towards its primaries and the 2024 general election.

Dr Bawumia at the 2021 Delegate Conference stressed that the mantra ‘Breaking the Eight’ can only be achieved if the leadership and supporters of the party work in harmony and resist the misleading information the opposition National Democratic Congress (NDC) try to spread about the government.

The Vice President, therefore, belived that the success or failure of the party in the next general election will be determined by how members conduct themselves in the future.

See also  This Good News For Ghana And Worth Celebrating. – Dr. Bawumia On New Ghanaian Cardinal

“A strong united party with the focus on highlighting our successes while countering the desperate misleading and misguided NDC propaganda.

“Rather than taking down each other, we must focus on taking down the NDC who will be a disaster for this country,” he stated on Sunday.

The NPP after securing victory in the 2020 Presidential election have been looking forward to winning the 2024 election as well.

However, since the inception of the Fourth Republic, no political party has exceeded two tenures in office.

The ruling party, nonetheless, are determined to be the first party to achieve such an objective, as such the mantra ‘Breaking the Eight’.

While acknowledging that their aim is a difficult one, Dr Bawumia highlighted the achievements chalked by predecessors of the party.

In his view, it is now up to the current supporters to continue the heritage by working together to be each other’s keeper.

“They have built and handed over to us a party and a tradition that we must always treasure. We have a charge to continue this great legacy. We have worked hard as a government under the visionary leadership of President Akufo-Addo and we are committed to continue to serve the good people of Ghana.

“Protecting our efforts, vision and legacy means we necessarily have to break the 8 as we have termed it. In this regard, let us all be aware that breaking the 8 will not be easy. It has not been done before in our history but I believe that if we are united, Insha Allah, we will break the 8. United we stand, and divided we fall,” he stated.

I'm Adwenpa-Hene |Blogger & Broadcaster Journalist. I am the CEO and manager of this noble website. I publish on Entertainment, Sports, Politics, Lifestyle, and Technology. You can also follow Us on : YouTube Channel - My Ghana Media TV, Facebook - MyghanaMedia TV , Twitter - @MyGhanamedia2 & Instagram - My Ghana Media TV. Email Address: [email protected] Contact Us: 0200818719
@@MyGhanamedia2
Previous NDC’s 2020 Election Petition Was Fundamentally Incompetent – Dr. Bawumia
Next Akufo-Addo: I Admit That Ghanaians Are Going Through Difficult Times But That’s Not My Fault