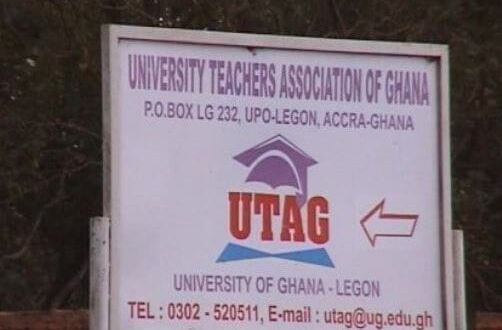 The University of Ghana, Legon (UG) branch of the University Teachers Association of Ghana (UTAG) has taken a unilateral decision to embark on “an indefinite industrial action” from Monday, January 3, 2022.

The decision was taken on Friday, December 17 at its meeting to firm up an earlier decision to reject the memorandum of agreement (MoA) signed between government and the national leadership, National Executive Committee (NEC).

Per that MoA, all university lecturers will receive a research allowance of $1,600 payable in 2024 and an Interim Market Premium will be implemented in 2022 after review by December, 2021.

“This decision, however, was subject to approval and ratification by all branch members of UTAG as provided under article XI sec 3 of the UTAG Constitution,” UG-UTAG explained in its resolution after Friday’s meeting.

It noted that its October resolution to stay at variance with the NEC decision had the tacit support of six other branches including Kwame Nkrumah University of Science and Technology (KNUST), University of Development Studies (UDS), University of Education, Winneba (UEW) and University of Energy and Natural Resources (UENR).

“UG-UTAG and the six other campuses that formally submitted written resolutions to reject the MoA, constitute more than 60 percent of the entire local membership of UTAG across the country,” UG-UTAG’s resolution jointly signed by President Dr Samuel Nkumbaan and Secretary Professor Ransford Gyampo said.

“Consequently, NEC’s decision to overturn the decision of the generality of members was unconstitutional and undermines the concept of representation.”

“In light of the above, UG, by this letter, wishes to advise NEC to respect the UTAG Constitution and the voice of its members, proceed to withdraw its communique of 11th November 2021, and duly inform Government of UTAG’s rejection of the MoA.

“UG-UTAG is resolved to take a unilateral decision to stand on its resolution of rejection of the MoA, and embark on an indefinite industrial action effective January 3, 2022. We call on all other branch members to support our decision to dissociate ourselves from the UTAG National leadership for entering into a deal that does not completely represent the interest of its membership, except perhaps for themselves only.”

I'm Adwenpa-Hene |Blogger & Broadcaster Journalist. I am the CEO and manager of this noble website. I publish on Entertainment, Sports, Politics, Lifestyle, and Technology. You can also follow Us on : YouTube Channel - My Ghana Media TV, Facebook - MyghanaMedia TV , Twitter - @MyGhanamedia2 & Instagram - My Ghana Media TV. Email Address: [email protected] Contact Us: 0200818719
@@MyGhanamedia2
Previous Price Of Sachet, Bottled Water Increased By 25%; Operators Blame Taxes, Cost Of Electricity As Reasons
Next You Are A Good Campaigner – Mahama To Akufo-Addo