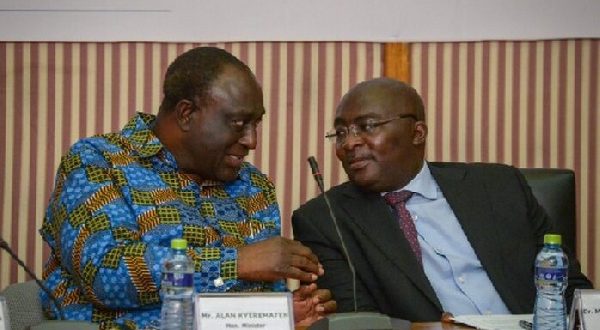 Majority Chief Whip, Frank Annoh-Dompreh is calling for a Bawumia-Alan partnership ahead of the 2024 presidential elections.

In his view, Dr Mahamudu Bawumia as presidential candidate with Alan Kyeremateng as his vice will be best for the governing New Patriotic Party (NPP).

This is a must for the success of this great tradition, he said.

“The Bawumia-Alan project is a must for the success of this great Tradition… I am all for it!” the Nsawam-Adoagyiri lawmaker tweeted on Monday December 20.

Although they are yet to officially declare their intentions to contest for their flagbearer position of the NPP, supporters of both Dr Bawumia and Mr Kyerematen have started campaigning to get their preferred candidate elected.

On Sunday December 19 during the NPP’s delegates conference in Kuamsi, supporters of the two personalities were seen in a campaign mood trying to project their candidate.

Supporters of Dr Bawumia were seen singing and dancing when the Vice President arrived at the venue for the event.

President Nana Addo Dankwa Akufo-Addo said at the event that he was determined to hand over power to the next residential candidate of the NPP on 7th January 2025 after the 2024 general elections.

He said the NPP is determined to break the 8-year cycle in order to sustain the economic growth seen under his administration.

He said “I am determined to hand over the baton to the next NPP presidential candidate.

“We want to break the 8 not just for ourselves but for Ghana because we know the zigzag, NPP comes to clean for them to be polluted , this is not the way progress will be brought to our country.

“We need secure period in office to make that irreversible change in the fortunes of our nation and we are capable of doing it. We will get a candidate that will unify our party and all of us will campaign to make that candidate the next president of the Republic.”

He further urged members of the NPP to embrace internal competition because competitions are part of the political exercise but cautioned the party against unhealthy competition that will hinder the determination of the party to break the 8-year cycle in the next general elections.

Mr Akufo-Addo said “Competition, we cannot avoid competition. Competition there will be but let that competition help the party and not hinder the party so that we can break the 8 in 2024.”

He further taunted the main opposition National Democratic Congress (NDC) when he asked about the one policy that the NDC and former President John Mahama have thought about in five years that they have been in opposition.

“All the things that we have done in government are things we thought about while in opposition, what is the one policy that the NDC and their leader John Mahama have thought about in five years that they have been in opposition. There is not one policy, the answer is zero,” the President said.

I'm Adwenpa-Hene |Blogger & Broadcaster Journalist. I am the CEO and manager of this noble website. I publish on Entertainment, Sports, Politics, Lifestyle, and Technology. You can also follow Us on : YouTube Channel - My Ghana Media TV, Facebook - MyghanaMedia TV , Twitter - @MyGhanamedia2 & Instagram - My Ghana Media TV. Email Address: [email protected] Contact Us: 0200818719
@@MyGhanamedia2
Previous Ghana Places Travel Ban On South Korea And Malta Over Covid-19
Next Mercy Naa-Oyoo Quartey Writes: What You Have To Know About Exclusive Breastfeeding