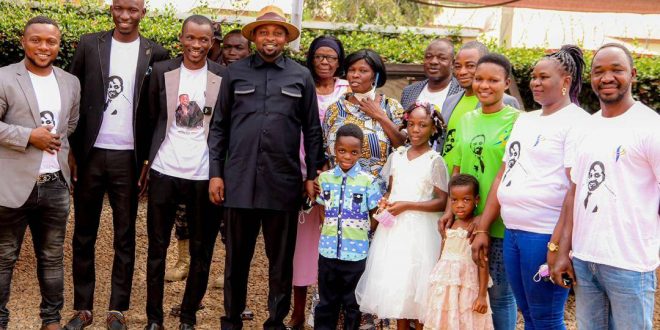 This was what happened exactly when the founder and oversea of Pottersville Church International, Bishop Samuel Owusu Owusu and his team appeared in the upper West Region of Ghana, called Wa.

The region is bordered on the North by the Republic of Burkina Faso, on the East by Upper East Region, on the South by Northern Region and on the West by Cote d’Ivoire. Wa is the largest predominantly Islamic city in Ghana.

Doubting the existence of the Holy Spirit, Wa and it enclaves encountered the powers of God through his Son ( Bishop Sam Owusu) where spiritual shockwaves brought Sinners close to the word and are
saved, Saints are sanctified. Eternal realities confront the soul and swallow worldly passions. Preachers lift Christ to unusual heights of glory, and it seems that almost everyone looks up to him and finds life.

Bishop Owusu arrived on Wednesday after a 12 hours journey by both air and land ,just to enter this city. He had the expectation to storm the city and conquer demons.
God supernaturally transformed the atmosphere and used this great man of God to heal and issue accurate prophecies beyond human comprehensions. On day two ,there were dozens of testimonies where the prophetic word the man of God gave the previous year ,which came out accurate! A woman came with her baby as proof that God used the man of God to bless her womb.

See also  Akufo-Addo: Coup d’etats In Africa Denied Us The Progress We Should Have Had

There was another young woman, who joyfully testified that the man of God had given her a word that before March 2021 ended, she would get married, and as clock works, by March 30th this year ,she got married. There was a sudden enthusiastic feeling for this city ,which every one fears for their differences in spiritual views. People sense the presence of God powerfully; conviction, despair, contrition, repentance and prayer easily flowed at this conference; people thirst for God’s word; many authentic conversions occur and the man of God truly change the lives of many. Wa has not seen the likes of Bishop Owusu.

If we were to study a portrait of who he is, painted by a realistic artist, we would first notice his scars and bruises, from the rejections and disappointments he had experienced over the years, by not only his parishioners, but from his own peers of the cloth. His beginnings were not one to count on, to be such a powerful force for this dispensation, they said.

Depending on when the portrait was finished, some wounds would be red and swollen, a few still bleeding from the backstabbing and effort made to silence him. A case in point, when he entered Wa, he experienced such opposition from a few, to the point where his hotel where he stayed, put sand in his food, and treated him with disdain, just because the news hit that he was there to silence the presiding demons of Wa. Paul writes of those same kinds of wounds at the end of his letter to the Galatians.

“I’m writing this letter bearing in my body the marks of one who has suffered greatly for you”. I’ve paid for the right to instruct you. I carry around on my body the scars, the wounds, the marks, physical evidence of torture-these brands of Christ”.

Bishop Owusu was determined to allow God to use him to bleed onto the lives of the people even to his own detriment. “ Nobody knows the pains and sufferings I bare in such a time. It took me twelve hours in traveling time, I had to take the airplane 4 hours, slept on the way, we took a car after arriving in Tamale for another 5 hours to drive to Wa, I almost missed my flight. As soon as I entered Wa I got extremely sick with a terrific flu and malaria, but, once I got on the pulpit, I allowed God to transform me”. Bishop quotes as he reflected on the past weekend. He defied the odds and the logic of human comprehensions, most of the members of his team were sick.

But at the end, many were saved, many were healed, many were delivered from darkness and all were filled with joy and laughter as the man of God shared the word of God with power and authority.

Wa, will never recover from the outbreak of Gods power experience. Indeed it was a supernatural encounter.

Bishop Dr Sam Owusu appreciated his team that joined him from Accra and the Branch pastor, Prophet Ignatius wessley and his hard working team.