Breaking News
Home / POLITICS / Majority To Bagbin: ‘Tell Us To Find A New Speaker If You Can’t Preside Again’ 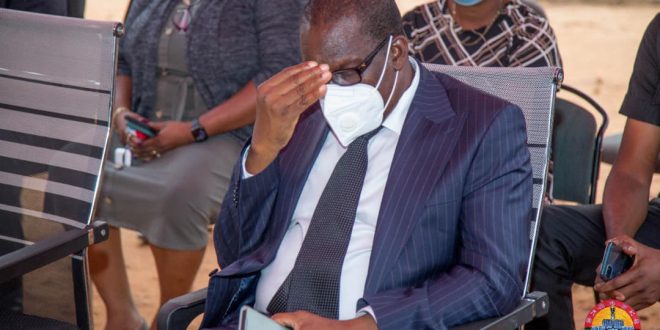 Majority To Bagbin: ‘Tell Us To Find A New Speaker If You Can’t Preside Again’

A Deputy Majority Chief Whip, Habib Iddrisu, is asking the Speaker of Parliament, Alban Bagbin, to let them know if he can no longer preside over the business of the house so they find another Speaker.

The Speaker of Parliament on Monday, December 20, 2021, during proceedings of the house asked the First Deputy Speaker to take the chair and never returned to the seat until the house adjourned on Tuesday, December 21, 2021.

The debate on the controversial e-levy bill in Parliament was expected to bring finality to an arguably long-standing disagreement over the 2022 Budget, but it ended up in a brawl as some MPs exchanged blows also in his absence.

Alexander Afenyo-Markin, the Deputy Majority Leader, while addressing the press on Monday, December 20, 2021, said the absence of Alban Bagbin throughout the first part of the sitting appears to be part of a grand plan by the minority to frustrate the approval of the bill.

“We will not proceed to take decisions without Mr. Speaker. We need him in the House because by the technicalities of our own procedures, one of our people would have to sit in, and therefore he will not have the opportunity to have his right of voting as a member. Mr. Speaker must show leadership in parliament,” he said.

However, the Minority has rejected the claims by the Deputy Majority Leader, Alexander-Afenyo Markin.

However, the Deputy Majority Chief Whip in a Citi News interview asked the Speaker to let the house know if he cannot preside over the house any longer.

He also added that the Majority Caucus will do whatever it can to pass the controversial e-levy when the house resumes, and there is nothing the Minority Caucus can do about it.

I'm Adwenpa-Hene |Blogger & Broadcaster Journalist. I am the CEO and manager of this noble website. I publish on Entertainment, Sports, Politics, Lifestyle, and Technology. You can also follow Us on : YouTube Channel - My Ghana Media TV, Facebook - MyghanaMedia TV , Twitter - @MyGhanamedia2 & Instagram - My Ghana Media TV. Email Address: [email protected] Contact Us: 0200818719
@@MyGhanamedia2
Previous President Akufo-Addo Appoints Bice Osei Kuffour (Obour) As Managing Director of Ghana Post
Next Video: One In Critical Condition In An Accident At Akyem Aboabo