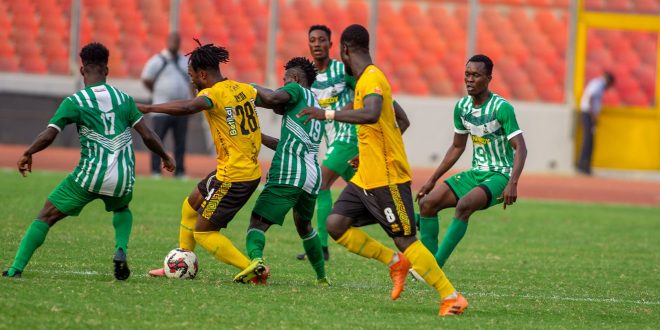 MTN FA Cup Round of 64: Asante Kotoko Crash Out After Another Defeat To City Rivals King Faisal

Favourites Asante Kotoko have been eliminated from the MTN FA Cup after losing 1-0 to city-rivals King Faisal at the Baba Yara on Wednesday, 29 December 2021 in the round of 64 tie.

Error-prone Andrews Appau gifted Faisal the equalizer after 26 minutes when Baba Yahaya capitalized on the defender’s mistake by blocking a pass to slot it beyond goalkeeper Ibrahim Danlad.

Kotoko came close to fetching the equalizer in the 38th minute but George Mfegue, handed another great opportunity, shot feebly in the hands of goalkeeper Frank Boateng.

Faisal nearly doubled their lead three minutes into the break but Mawuli Wayo’s effort was shielded by Mubarik Yusif.

Wayo had a lovely exchange between himself and Baba Yahaya.

Before the start of the second, Kotoko coach Prosper Narteh Ogum brought on Joseph Amoako for George Mfegue and Sheriff Mohammed was substituted by Christopher Nettey.

Kotoko kept on making incursions and in one of those moves Abdul Latif came  in with a great tackle to stop Franck Etouga from pulling the trigger.

After the hour, Evans Sarfo unleashed  a long range shot but Danlad Ibrahim did well to grab it.

Stephen Amankona came close against with a golden opportunity to equalize but his attempt missed target by an inch.

Substitute Evans Adomako failed to steer home a rebound as his effort was saved. Sarfo Taylor’s connection to Richmond Lamptey’s pass into the box was palmed back into play but Adomako couldn’t strike gold.

I'm Adwenpa-Hene |Blogger & Broadcaster Journalist. I am the CEO and manager of this noble website. I publish on Entertainment, Sports, Politics, Lifestyle, and Technology. You can also follow Us on : YouTube Channel - My Ghana Media TV, Facebook - MyghanaMedia TV , Twitter - @MyGhanamedia2 & Instagram - My Ghana Media TV. Email Address: [email protected] Contact Us: 0200818719
@@MyGhanamedia2
Previous NPP Youth Alliance In Diaspora Calls For Suspension Of National Delegates Planning Committee
Next MTN FA Cup: Heart Of Lions Dump WAFA Out At Round Of 64