Breaking News
Home / GENERAL NEWS / 2021 In Review (I): Big Stories That Made Headlines Between January & March 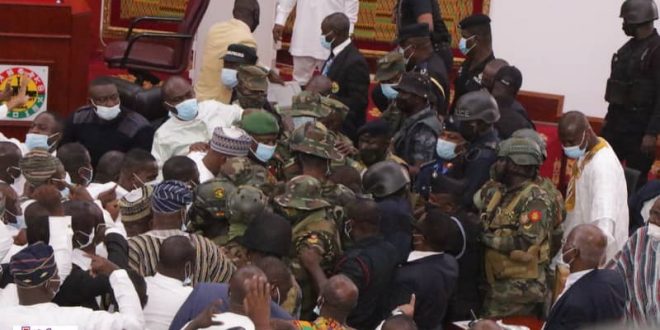 2021 In Review (I): Big Stories That Made Headlines Between January & March

In just three days, we will be bidding farewell to 2021. And just like previous years, this one has been characterised by numerous incidents and events.

Some of the stories we received with broad smiles; others were unpleasant.

But before we draw the curtain on the year, Myjoyonline.com will take you down memory lane to highlight incidents that made headlines between January and March.

January 2021 was highly anticipated considering that the better part of 2020 there were many in fear and gloom because of the Covid-19 pandemic. Moreover, it was an eventful year in Ghana after the country went through another knife-edge election to elect a president and 275 MPs. Oh, and that in itself came with its drama.

After the 2020 general election, it is expected that the legislative arm of government will transition into a new one. However, the dawn of January 7, 2021, which birthed the 8th Parliament of the Fourth Republic, will go down as the most chaotic moment in the country’s history.

An event that usually takes less than two hours lasted close to nine hours due to a recorded debacles.

First, it was the commotion over sitting places. The Members of Parliament elected from the National Democratic Congress (NDC) had occupied seats on the majority side.

However, when a resolution was taken, the next contention was recorded when the Ablekuma West MP, Ursula Ekuful, was pushed from her seat for insisting on sitting at the Majority side despite the takeover by the NDC.

The House was again thrown into disarray after the legitimacy of the Assin North MP-elect, James Gyakye Quayson, was called into question by Effutu MP, Alexander Afenyo Markin.

But it was resisted by the NDC. The Clerk of Parliament, Cyril Kwabena Oteng Nsiah, subsequently gave in and permitted the Assin North MP to vote and bear any consequences therein.

Another round of uncontrollable chaos erupted on the floor during the voting for the Speaker of the 8th Parliament.

A military team stormed the chamber this time but left 10 minutes later.

The voting process after that took place peacefully. But things took an unexpected during the collation when the Tema West MP-elect, Carlos Ahenkorah, snatched and bolted with some ballot papers.

His one-man action triggered near-brawls, which took the intervention of the House’s marshals to settle.

His election is significant since he is the first Speaker of Parliament who is not selected by the governing party.

After being declared winner of the 2020 Presidential election, President Akufo-Addo was sworn in to commence his second tenure.

Here, he promised that all he will do in the next four years will be for the common good of the nation.

The flagbearer of the NDC, John Dramani Mahama in December 2020 prayed the Judiciary to challenge the result of the presidential election.

After the first hearing, on Thursday, January 14, Mr Mahama was granted leave by the Supreme Court to amend his petition.

However, the plaintiff suffered his first loss on Tuesday, January 19, when the Supreme Court dismissed a motion he filed seeking permission to elicit answers to some 12 interrogatories from the Electoral Commission.

Mr Mahama thereafter filed an application asking the Apex Court to review its dismissal of the motion. Again, it was dismissed.

To register their displeasure, the spokesperson for Mr Mahama’s legal team, Marietta Brew Appiah-Oppong said the petitioner was being denied the right to a fair hearing.

However, the first respondent; Electoral Commission in their reaction described Mr Mahama’s petition as a total waste of time.

President Akufo-Addo who was the second respondent urged the Supreme Court to dismiss the election petition arguing that the petition was borne out of unfounded imagination.

Amidst his legal battle, the President on Thursday, January 21, submitted to Parliament through Speaker Alban Bagbin, a list of names for appointment as Ministers in his new government.

The list included the names of some 46 persons expected to fill the ministerial positions and support the president to fulfil his mandate in the next four years.

On Wednesday, January 27, the former President was laid to rest at the Military Cemetery in Burma Camp.

His burial was preceded by a procession through the principal streets of Accra from the Osu area, then to the 37 Military Hospital, and ended at the Burma Camp.

Some activists opened an office for the Lesbian, Gay, Bisexual, Transgender and Queer (LGBTQ+) community at Ashongman in Accra on January 31. When this information became public knowledge, a section of Ghanaians were exasperated.

Religious leaders and some opposers rose in arms kicking against the move. They called on government’s intervention to clamp down on, what they described as ‘ungodly practices’ in the country.

Vetting of the Ministers

The process was scheduled to end on Tuesday, March 9. The Committee vetted at least two nominees a day.

Following the agitation in January, the Ghana Police Service stormed the newly launched office of the LGBTQ+ community in what was described by many as a Rambo-style. The security personnel raided and closed down the venue.

However, human rights groups like Amnesty International condemned the police for what it described as an invasion of the safe space for LGBT rights in Ghana.

Akufo-Addo speaks on LGBTQ+ topic for the first time

Subsequently, President Akufo-Addo openly declared his stance on the topic that had been in the media space for nearly a month.

As far as the President was concerned, legislation of same-sex marriage to become lawful was not a matter he and his government will ever consider.

Amidst the plethora of discussions over LGBTQ+ activities, Ghana received its first consignment of the highly sought-after commodity this year, the Covid-19 vaccines.

The Minister for Health, Kwaku Agyeman-Manu led the government delegation to receive the vaccines at 7 am at the Kotoka International Airport.

Prior to the arrival of the consignment, health practitioners urged the public to cooperate with the government in the administration of Covid-19 vaccines when they arrive in the country.

President Akufo-Addo together with the First Lady, Rebecca Akufo-Addo on Monday, March 1, received the first shot of the 600,000 Covid-19 vaccines that arrived in the country.

They took their first dose of the Oxford/AstraZeneca Covid-19 vaccine at the 37 Military Hospital in Accra.

At the Ghana Police Hospital, Mr and Mrs Bawumia were administered their first doses of the vaccine.

This move was necessitated due to the myths that surrounded the drugs when they first arrived in Ghana.

President Akufo-Addo, therefore, hoped that by taking the first dose to live on national television, many will come to accept the vaccine.

Later that day, the Minority MPs on the Appointments Committee voted on the ministerial nominees and unanimously rejected three.

Also, five nominees were deferred by the Minority MPs to reappear for further questioning.

The NDC MPs provided various explanations to back their decision.

After a heated repartee between the Majority and Minority in Parliament, the House on Wednesday, March 3, approved all of President Akufo-Addo’s ministerial nominees.

The conclusion was reached via a voice vote on the floor.

President Akufo-Addo on March 3, directed the Auditor-General, Daniel Domelevo to proceed on retirement.

The order came barely 16 hours after Mr Domelevo had returned from his 167-day accumulated leave.

The directive, according to a statement signed by Secretary to the President, Nana Asante Bediatuo, stemmed from an indication by the Audit Service Board that Mr Domelevo has exceeded the eligible age to remain in the workforce.

This generated an uproar in the country with many Civil Society Organisations (CSOs) describing the Akufo-Addo government as one that is unwilling to fight corruption.

This according to the apex court is because the case before it has no merit.

The 2020 NDC flagbearer expressed his disappointment in the Supreme Court’s unanimous decision to dismiss his election petition.

Reacting to his defeat, the former president intimated that, his defeat came as no surprise as the apex court had denied many of the applications filed by his legal team.

Two students with dreadlocks were been denied admission into the Achimota School.

School authorities claimed it was against the rules of the school to admit students with dreadlocks, thus, if the Rastafarians wanted to be in the facility, they must shave their hair.

The first quarter of the year was not as smooth as many ought it to be. However, with a glimmer of hope, the populace looked on for a better future.

Visit Myjoyonline.com on Wednesday to recount incidents between April and June.