Reading the content of the Citation presented to the vociferous Hon Isaac Bronya, the District Chief Executive described the Odaho Assembly Member as someone whose excellent contributions in debates and deep in-depth in analysing issues during general assembly meetings has aided the assembly succeeded in many decisions made so far.

Receiving the honorary awards bestowed upon him by the Assembly led by Mr Clement Opoku Gyamfi aka CID the District Chief Executive, Hon Bronya was grateful for the honour done him.

He mumbled that the organisers had shown they were monitoring the little contributions that he was making on the floor of Assembly Meetings and urged all members of the assembly to know their contributions are being monitored and rewarded one day.

He further added that this recognition would spur him on to do more, give off his best in the coming years and finally Commended their DCE for instituting the awards scheme.

Below is the full inscription on the Citation of honour: 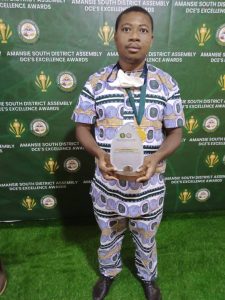 In recognition of your excellent Contribution to debates and analytical discourse during general Assembly meetings.

I'm Adwenpa-Hene |Blogger & Broadcaster Journalist. I am the CEO and manager of this noble website. I publish on Entertainment, Sports, Politics, Lifestyle, and Technology. You can also follow Us on : YouTube Channel - My Ghana Media TV, Facebook - MyghanaMedia TV , Twitter - @MyGhanamedia2 & Instagram - My Ghana Media TV. Email Address: [email protected] Contact Us: 0200818719
@@MyGhanamedia2
Previous General Manager of Multimedia Confirmed Dead
Next Nkwanta North District Assembly Distributes Cash of GH¢48,740 And Some Items To 49 Persons With Disabilities