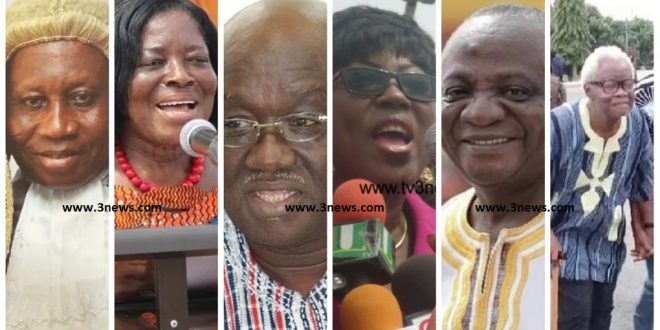 Goodbye To 2021: Ten Prominent Ghanaians Whose Deaths Shook The Nation

It’s the last day of 2021 and many Ghanaians will be bidding the year goodbye.

However, some Ghanaians could not live to see the end of the year and the year rather bid them goodbye.

A founding member of the National Democratic Congress (NDC), Captain (rtd) Kojo Tsikata died in the early hours of Saturday, November 20 and was buried at a private ceremony on Thursday, December 9.

The former Navrongo Central Member of Parliament (MP) died in the early hours of Thursday, October 14. He had served in the first term of President Nana Addo Dankwa Akufo-Addo as Minister of Sanitation and later Minister of Aviation.

Ghanaians woke up to the news of the death of the former Transport Minister on Tuesday, November 16, a day the country had lost a former Vice President, Alhaji Aliu Mahama, nine years ago. She died at 65.

The former Central Region Minister and Women’s Organiser of the NDC lost her life on Sunday, September 19 in Tema. She had battled a long illness. She was laid to rest in her hometown a few weeks ago.

Not the usual member of a political party but Papavi led a separatist group in the Volta Region known as the Homeland Study Group Foundation (HSGF). The group sought secession of the former Western Togoland from Ghana. He was facing charges of treason but died on Saturday, October 16.

Supreme Court judge Samuel Kofi Marful-Sau lost his life on Tuesday, August 10 at the age of 64. He was one of the judges who sat on the election petition filed by NDC’s 2020 Presidential Candidate John Dramani Mahama at the Supreme Court.

A Highlife legend and pioneering leader of the Musicians Union of Ghana (MUSIGA), Nana Ampadu died on Tuesday, September 28. He was given a state burial as a result of his feat in the Ghanaian music industry.

See also  Can Ghanaians Ever Remove a President From Office Under the 1992 Constitution? - Episode 1

The death of the veteran Ghanaian actor was announced on Thursday, September 16, a few days after photos of his ail condition went viral on social media. The actor with the fine Fante accent had graced the Ghanaians screens since the 1980s.

The former Asante Kotoko left back lost his life after a long battle with sickness. He died on Tuesday, August 3 and was buried in a specially-hewn casket.

Other high-profile deaths were also recorded in the year under review.

The Paramount Chief of New Juaben Traditional Area, Daasebre professor Emeritus Oti Boateng, was a casualty of 2021, dying at the age of 83.

A few days into the year, the New Patriotic Party (NPP) lost one of its stalwarts in the Ashanti Region, Dr Kwame Amoako Tuffour, the brain behind the Ghana School Feeding Programme (GSFP).

Ghana’s Ambassador to Italy Mrs Eudora Quartey-Koranteng on Tuesday, October 19 lost her life while on diplomatic duties in Rome.

Just a couple of days ago, footballer Christian Atta Gyan lost his life after being diagnosed of terminal cancer in November.

I'm Adwenpa-Hene |Blogger & Broadcaster Journalist. I am the CEO and manager of this noble website. I publish on Entertainment, Sports, Politics, Lifestyle, and Technology. You can also follow Us on : YouTube Channel - My Ghana Media TV, Facebook - MyghanaMedia TV , Twitter - @MyGhanamedia2 & Instagram - My Ghana Media TV. Email Address: [email protected] Contact Us: 0200818719
@@MyGhanamedia2
Previous 3 SHS Students Arrested Over Burning Of Bolt Driver Remanded
Next End- Of The Year 2021: The Seven (7) Important Questions To Ask Yourself As The Year Draws To A Close  –  Sir John Writes