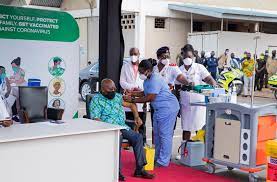 President Akufo-Addo is urging the Black Stars of Ghana to win the 2021 edition of the African Cup of Nations, being held in Cameroon.

He said the team should do all it can to end the 40-year trophy drought.

“Like with every edition of AFCON the Ghanaian people expect nothing short of ultimate glory from the stars.”

“The pressure to succeed is understandably high because of our status of four-time winners, and also because it has been 40 long years since we last lifted the trophy.”

The Black Stars, led by Milovan Raievac, are in Group C and will begin the tournament this Monday with a game against Morocco before playing Gabon and Comoros.

The team arrived in Yaoundé, Cameroon, on Saturday after training in Doha.

I'm Adwenpa-Hene |Blogger & Broadcaster Journalist. I am the CEO and manager of this noble website. I publish on Entertainment, Sports, Politics, Lifestyle, and Technology. You can also follow Us on : YouTube Channel - My Ghana Media TV, Facebook - MyghanaMedia TV , Twitter - @MyGhanamedia2 & Instagram - My Ghana Media TV. Email Address: [email protected] Contact Us: 0200818719
@@MyGhanamedia2
Previous We Should All Aspire To Be Good Citizens Of Our Country Ghana – Sir John Writes
Next Founder of GSET, Miracule Gavor, Awarded $10,000 Scholarship To Launch A Professional Development Program In Ghana