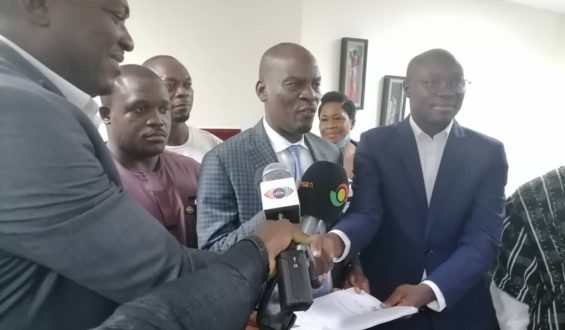 Mobile money Association of Ghana has petitioned the Minority Caucus in Parliament to ensure the new Electronic Transaction Levy (E-Levy) is rejected when it is put before the house.

According to the group, the analysis they did on the E-levy following its introduction in the 2022 budget shows its implementation will pose a challenge not only to Ghanaians and agents but also have some effects on the economy.

Presenting the petition to the Minority, the General Secretary of the Association, Evans Otumfour cited amongst others that approval of the levy will undermine the country’s cashless system, job losses and affect the government’s digitisation drive.

“Yes mobile money has become the major driver of both formal and informal sector, everybody is now leveraging on whatever economic activity to transact using the mobile money platform. So after our assessment, we have realised that there are about 12, challenges should the government continue to pursue the e-levy in its current state or form,” he said.

Mr Otumfour stated that given the challenges they have highlighted in the petition, the E-levy bill in its current form “should be scrapped”.

He added that “we are agents and we play major roles within the industry so when we realise that our profit margins are going to be affected, our lives are also under threat then we will be left with no alternative than to consider pulling back our investment.”

The Minority has mounted a strong defence against the inclusion of the 1.75% levy in the 2022 budget claiming it will only worsen the economic burden of the citizenry.

But, according to Finance Minister, Ken Ofori-Atta the levy will increase the country’s tax-to-GDP from 13% to a targeted 16% or more.

The other components of the budget have been approved with the exception of the E-Levy which the Minority vows to fight vehemently.

Meanwhile, the Mobile Money Association say it will be in the government’s interest to extensively look at the levy and its impact before its passage and implementation.

Mr Otumfour said that “a more thorough stakeholder consultation must take place so that at the end of the day there should be a better module that would not serve as a danger for the industry.”

He added that “we are of the view that if government should consider the following proposals it will be in the best interest for the country and keep us on the journey.”

Minority Chief Whip, Muntaka Mubarak, observed that government is set to meet the caucus over the levy and assured the group of conveying their concerns to government