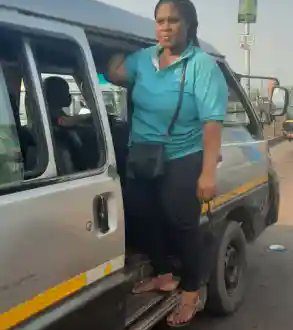 “When life gives you lemons, make lemonade” is a proverbial phrase used to encourage optimism and a positive can-do attitude in the face of adversity or misfortune.

Lemons suggest sourness or difficulty in life; making lemonade is turning them into something positive or desirable.

This encapsulates the life of Joycelyn Akorfa Atsoribo, who got pregnant at 17 years after Junior High School at Hohoe in the Volta Region.

Atsoribo has advised the youth not to use unemployment as an excuse to relegate their ambition to pursue their career dreams.

The mother of two, who is now a level 400 student, reading information technology and psychology at the University of Ghana, said she attempted suicide a couple of times due to the challenges life threw at her.

“… I disobeyed my mom and I am paying dearly for it. This is the part that I get teary anytime I remember that my mom actually advised me against the guy and I didn’t listen and it has cost me dearly. So we should listen to our mothers,” Atsoribo said on The Asaase Breakfast on Friday.

“I don’t regret how far I have come because life is a gradual process. You have to take it a step at a time. Along the line I felt suicidal. I have attempted taking my life about two or three times,” Atsoribo told Asaase Radio’s Kwaku Nhyira-Addo.

She wants the youth to take inspiration from her story and never give up on themselves in life.

Taking a role as a bus conductor (trotro mate) came up after her fruit business at Amrahia in Accra was halted by her landlord who allegedly was not happy that the business was thriving. The landlord stopped Ms Atsoribo’s business only for his sister to operate same at the same spot.

Sharing her daily routine with The Mirror at the Madina station in Accra last Tuesday, she said she had been a trotro mate for the past five months. Among some of the jobs she had done were serving as a waitress in various restaurants, working as an insurance agent and a security guard.

For her current job, she gets on the road by 5a.m. daily and closes between 9pm and 10pm. She receives GHC 35 daily as her wage and saves GHS10 daily.

Occasionally calling out for passengers going to Dodowa as we had the chat, she explained that the work was tedious, particularly with the lifting of items.

“Sometimes l am even surprised at myself that I am able to lift some of the loads, especially as I have gone through a caesarean section”.

Atsoribo, who sounded very passionate, said one of the challenges that came with the job were insults from passengers.

“The rate at which passengers insult me at the slightest thing is so painful. Some people do not respect mates; l think some see me as useless. Some of the insults are so painful, it can even influence you not to show up the next day, we need to treat trotro mates well,” she added.

Atsoribo who was a first-time mum at age 17 explained that her only worry at the moment was how to pay off her fees for the final year and hoped that some philanthropists would come to her aid.

Earlier, she had relied on her little savings and student loans.

Atsoribo travelled from the Volta Region to Accra in 2011 after high school education at Afadjato Senior High School through a male friend who had encouraged her to move to Accra.

This friend, she said, later wanted a sexual relationship and when she refused, “he packed my things out of his house”.

Life in Accra, she explained, had been tough particularly with accommodation issues. She had lived it all through men who would want to use accommodation as a bait to take advantage of her.

From moving from one place to another and moving in with friends, “I met another man at the first restaurant I worked. I thought I had met an angel who said I should not worry and could stay in his big apartment. That night after he had his bath he told me to come and sleep by him on his bed so when I refused he sacked me, it was around 3am.”

She got pregnant for the second time in level 200 with a young man she had known since her senior high school days and whom her mother had earlier cautioned against on their first visit to see her at Hohoe in the Volta Region.

She explained that the relationship was “hell” and eventually, living with the said boyfriend who was also sharing a single room with four of his cousins, making them five in a room became impossible.

“At that time anything that goes wrong in the room will have them point fingers at me. That was the beginning of my many problems. It was a difficult moment as there were a lot of issues and l had to leave the relationship,” she said.

Thanking her mother in tears for not turning her back on her, she said “my mother took the baby after, in addition to my first child who is now 17. Now, I am a single mother of two simply because I didn’t listen to my mother’s advice. I have to work as a trotro mate just to see myself out of school and take care of my kids too”.

Atsoribo said her first pregnancy happened at a time when she had completed Junior High School in Hohoe.

“It was during JHS night. In Hohoe, everybody knows about JHS night. It is a big event. I had sex with an old friend after taking in alcohol. My mum took the baby after seven months so I could go to senior high school,” she said.

According to her, it was important for people, especially females, to listen to the advice of their mothers because “I am paying dearly for not listening”.

Kwaku Boafo, who is Atsoribo’s employer (the driver of the trotro) described her as “a very hardworking woman and because of her, some women had been coming to me to recommend them to other drivers. I will encourage other drivers to also utilise the service of the women as well.”