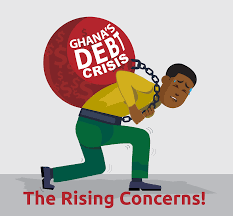 He explained that provisional data on budget execution for 2021 indicated an overall broad fiscal deficit – cash, excluding financial sector clean-up costs- of 9.7 percent of GDP, against the programmed target of 9.4 percent of GDP.

He further explained that credit performance improved marginally, consistent with the gradual recovery in the real sector. Annual nominal growth in private sector credit increased to 11.2 percent in December 2021 compared with 10.6 percent, in the corresponding period of 2020.

However, sustained price pressures weighed on real private sector credit, which contracted by 1.3 percent compared to modest growth of 0.2 percent, over the same comparative period.

“The COVID19 regulatory policy measures were kept in place during 2021 and helped provide some support to lending activities of banks. New Advances extended by the commercial banks to the economy were GH¢36.4 billion, registering a growth of 6.8 percent compared with new advances of GH¢34.1 billion extended in 2020. On the money market, interest rates reflected mixed trends across the yield curve.

“The rates on the 15-year and 20-year bonds, however, remained unchanged at 19.75 percent and 20.20 percent respectively, over the same comparative period.

“The weighted average interbank rate declined further to 12.68 percent from 13.56 percent, induced by persistent structural liquidity on the interbank market. This transmitted to the retail end of the market, and average lending rates of banks declined marginally to 20.04 percent in December 2021 from 21.20 percent recorded in the corresponding period of 2020.”

I'm Adwenpa-Hene |Blogger & Broadcaster Journalist. I am the CEO and manager of this noble website. I publish on Entertainment, Sports, Politics, Lifestyle, and Technology. You can also follow Us on : YouTube Channel - My Ghana Media TV, Facebook - MyghanaMedia TV , Twitter - @MyGhanamedia2 & Instagram - My Ghana Media TV. Email Address: [email protected] Contact Us: 0200818719
@@MyGhanamedia2
Previous Government To Restore PSRLs On petrol, Diesel And LPG Effective February 1
Next Survey: 56% Of NPP Supporters Against E-Levy