Breaking News
Home / GENERAL NEWS / Video: ‘My Appointment Has Not Been Terminated’ – MD Of Ghana Airports Company Ltd. Reacts To His Dismissal 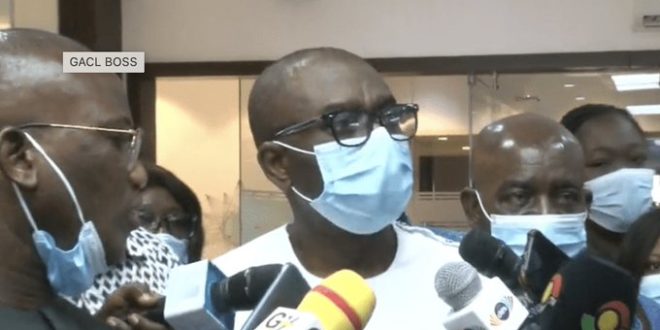 Video: ‘My Appointment Has Not Been Terminated’ – MD Of Ghana Airports Company Ltd. Reacts To His Dismissal

The dismissed Ghana Airports Company Limited Managing Director, Yaw Kwakwa expressed surprise when journalists asked him of his reaction following reports of the termination of his contract while on tour with Parliament’s Transport Committee.

Dismissed MD of Ghana Airport Company Limited, Yaw Kwakwa says he is unaware that his appointment has been terminated#MetroNews pic.twitter.com/BM1CVc0ngN

I’m unaware of my sacking, I’ll cross the bridge when I get there – GACL MD, Yaw Kwakwa#3NewsGH pic.twitter.com/rmr7zCgM40

The news about Mr. Kwakwa’s dismissal broke whilst he was leading Parliament’s Roads and Transport Committee to inspect the McDan Aviation facility at the Kotoka International Airport (KIA).

“I don’t know what you are talking about. My appointment has not been terminated so if you have any evidence… I don’t know about it,…. but when I get to that bridge I will cross it,” Mr. Kwakwa told the media when he was asked about his dismissal on Wednesday.

According to JoyNews’ Kwesi Parker Wilson, Management of GACL including the Deputy Transport Minister, Hassan Tampoli, who were with Mr. Kwakwa got equally astonished upon hearing the news. 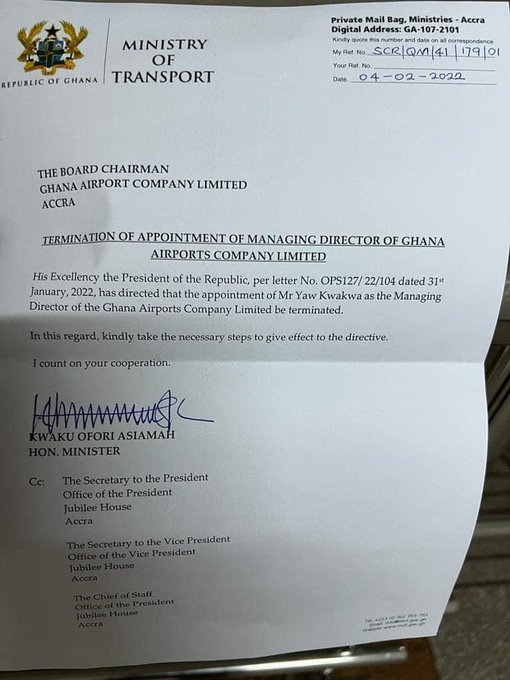 Kwaku Ofori Asiamah added, “in this regard, kindly take the necessary steps to give effect to the directive. I count on your cooperation.”

It is unclear why Mr Kwakwa was sacked, but in the last few weeks, the Airport Company and newly established private jet company operated by McDan Aviation have been involved in a back and forth publicly.

On January 1, the GACL ordered the newly launched McDan Aviation to suspend the use of the Kotoka International Airport (KIA) until further notice.

In a letter signed on January 31, by then Managing Director of the Company, Yaw Kwakwa, he referenced a notice to the company to suspend its inauguration of the Private Jet Terminal last Friday, which was not adhered to.

Consequently, he said, “We note with concern your failure to comply with the directive despite the outstanding issues on the prior terms and conditions for the use and operations of Terminal 1 as a Private Jet Terminal.

“Management has consequently directed the suspension of your use of Terminal 1 until further notice.”

The CEO of McDan Aviation was “requested to relinquish the keys to enable Management to undertake a Joint Inventory by close of business day, Monday, January 31.”

The Company has accused McDan Aviation of breaching the laid down procedure after procuring its license to operate in 2019.

It raised concerns in a letter on January 28, the scheduled date for the McDan Group of Companies’ private jet service launch at KIA Terminal 1 in Accra.

Despite a GACL directive to call off the event, McDan Aviation went ahead to hold the ceremony. It was, however, boycotted by GACL leadership.

The Managing Director of McDan Aviation, Daniel McKorley, wrote to confirm their suspension of operations as instructed by the Airport Company.

Meanwhile, the issue has been resolved and the aviation company has started operations.

Meawhile, the Deputy Transport Minister, says President Akufo-Addo is not obliged to explain why he sacked the Managing Director of the Ghana Airports Company Limited (GACL), Yaw Kwakwa.

According to Hassan Sulemana Tampuli, since the President did not state why he appointed the embattled Manager, he is not required to give reasons for firing the appointee.

However, the news of his dismissal broke whilst he was leading Parliament’s Roads and Transport Committee to inspect the McDan Aviation facility at the Kotoka International Airport (KIA).

In view of this, whilst interacting with the press, he was asked the reason behind the GACL MD’s dismissal,; the Deputy Minister quizzed, “Have you sighted a copy of his appointment letter?”

For him, the President is within the right to axe Mr Kwakwa.

“The appointment letter doesn’t say why he was appointed, so I don’t know why it should be stated why he has been relieved of his position.

Some persons have attributed Mr Kwakwa’s expulsion to his decision to suspend newly launched McDan Aviation operations at the Kotoka International Airport (KIA) until further notice.

Mr Tampuli, however, refuted the claims.

According to him, “These are matters in the reams of conjecture, I am not sure that is stated in the letter that is your assumption.”

I'm Adwenpa-Hene |Blogger & Broadcaster Journalist. I am the CEO and manager of this noble website. I publish on Entertainment, Sports, Politics, Lifestyle, and Technology. You can also follow Us on : YouTube Channel - My Ghana Media TV, Facebook - MyghanaMedia TV , Twitter - @MyGhanamedia2 & Instagram - My Ghana Media TV. Email Address: [email protected] Contact Us: 0200818719
@@MyGhanamedia2
Previous The Ill-fated E-Levy: Are Ghanaians And Nana-Bawumia Government Ready? NO! – JOY Writes
Next Desist From Running To Emergency Scenes – GNFS Advises Public