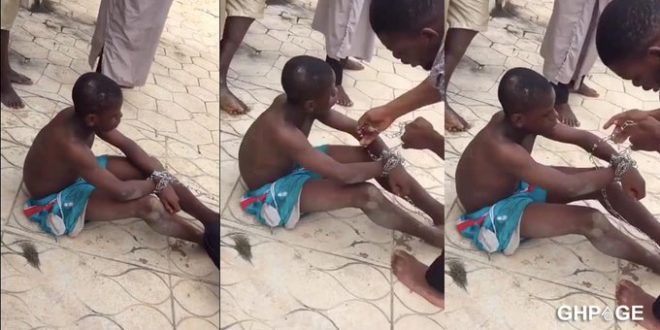 The quest to become rich overnight has been the main aim of some youth in the world especially after they have seen their age mate succeed and they feel they are being left behind.

A young man is currently in the custody of the Police after he was caught in the act of trying to kill his mother for money rituals.

A teenage boy believed to be in his 14s has been arrested for allegedly trying to use his mother for money rituals.

According to eyewitnesses, the young boy was caught in the act whiles he was stabbing his mother with a sharp object.

In the video available, the young boy could be seen tied with chains while another man was seen warning him against engaging in money rituals.

See also  Video: Couple Of Coups May Happen In West Africa Between Now And June 2023 – Prof. Aning
Disclaimer: MyGhanaMedia is not responsible for this report and its content.There are four types of content published on MyGhanaMedia daily: curated content; syndicated content; user-generated content; and original content.

I'm Adwenpa-Hene |Blogger & Broadcaster Journalist. I am the CEO and manager of this noble website. I publish on Entertainment, Sports, Politics, Lifestyle, and Technology. You can also follow Us on : YouTube Channel - My Ghana Media TV, Facebook - MyghanaMedia TV , Twitter - @MyGhanamedia2 & Instagram - My Ghana Media TV. Email Address: [email protected] Contact Us: 0200818719
@@MyGhanamedia2
Previous Joy Writes: Down The UP Escalator Reflections: Fix the Country!
Next Court Places Injunction On UTAG Strike