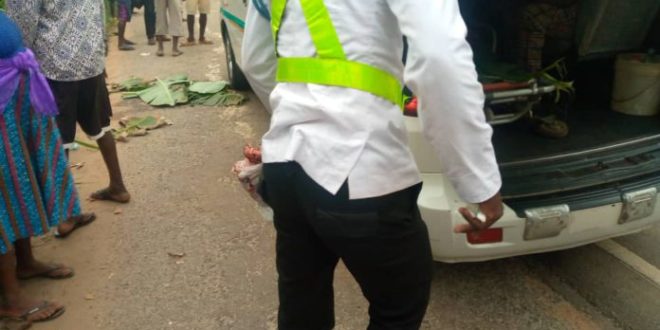 A yet-to-be-identified woman, believed to be in her 20s, has allegedly been killed by a cargo truck with registration number GE 819-Y at the Awutu Bawjiase station in the Awutu Senya West District of the Central Region.

The incident reportedly occurred after the truck failed its brake killing her on the spot.

According to police, the incident happened shortly after she alighted from a taxi with other passengers.

An eyewitness, Justice Baah, told MyGhanaMedia.com that the truck had run over the deceased’s waist area.

Justice Baah also indicated that, the deceased intestine gushed out whiles body deposited at Agona Swedru government Mortuary whiles the driver and the car has been arrested at Bawjiase District Police station as investigations begin into the issue.

I'm Adwenpa-Hene |Blogger & Broadcaster Journalist. I am the CEO and manager of this noble website. I publish on Entertainment, Sports, Politics, Lifestyle, and Technology. You can also follow Us on : YouTube Channel - My Ghana Media TV, Facebook - MyghanaMedia TV , Twitter - @MyGhanamedia2 & Instagram - My Ghana Media TV. Email Address: [email protected] Contact Us: 0200818719
@@MyGhanamedia2
Previous Alban Bagbin: I Do Not Want To Be Part Of The Many Judgment Debts For The country
Next SHS Postings Out: GES Announces Confirmation Of School Selection For 2021 BECE Candidates