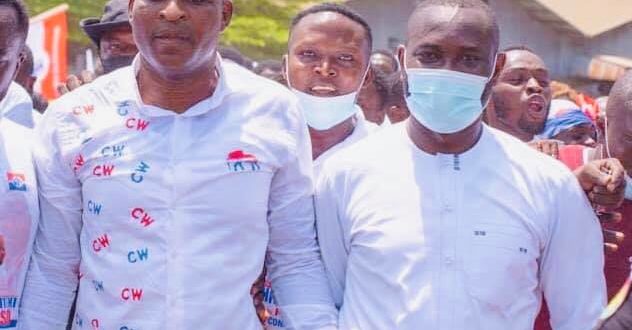 The executives of New Patriotic Party in Ejisu Constituency of the Ashanti Region has rubbished the allegations made by Some angry members of the party against Ejusi MP and the regional Chairman Ahead Of Internal Election.

Some angry members of the ruling New Patriotic Party (NPP) in the Ejisu Constituency  called on the National Executive Committee (NEC) to call the Ashanti regional Chairman, Mr Bernard Antwi Bosiako known as Chairman Wontumi and the Member of Parliament for Ejisu, John Kumah to order or there would be a bloody clash in the upcoming Polling station elections.

According to the aggrieved members of the party, Chairman Wontumi has again launched his mafia tactics which caused the party in the 2020 parliamentary elections.

Mr. Kwaku Frimpong, a polling station executive in the Ejisu Constituency speaking in an interview stated that the upcoming Polling Station elections of the party are gaining notoriety for clashes as aspirants, groups loyal to them turn against their opponents.

“The National Executive Committee must call Chairman Wontumi and John Kumah to order or there would be a bloody clash.

But according to a statement signed by Acting Research and Elections Officer ,Ejisu Constituency, denied the publication as false and baseless propaganda Against chairman Wontumi and Hon Dr. John Kumah, MP for Ejisu.

Our attention has been drawn to a publicationon the above subject on the various media platforms ,and wish to categorically denied the publication as false and baseless propaganda Against chairman Wontumi and Hon Dr. John Kumah, MP for Ejisu.

To set the records straight, per the time table issued by the Party, a copy is hereby attached, no Forms have been issued to Ejisu or any constituency as at 14th February 2020 at the date of their purported publication on an online platform and an interview on Kesben 93.3FM, a Kumasi based radio station.

Per the outcome of a meeting held on Monday 14th of February, 2022, Chairman Wontumi made it clear to all the 13 constituencies present that nomination forms will be opened on the 19th of February,2022 and that all Committee Chairmen, together with the Various MPs, Constituency Chairmen and Secretaries would be invited to come for the forms when they are ready.

It is therefore a surprise to this committee that a so-called group in Ejisu have been denied access to those forms. This is only a calculated attempt to discredit chairman Wontumi and Hon Dr John Kumah .

We wish to assure all NPP members in the Ejisu constituency of a fair transparent process that will allow everyone interested in the coming elections to take part without hindrances.

We also wish advise all party members to use party structures to seek redress before running into the media to make allegations that may tarnish the image of the party.

Attached to this rejoinder is a memo released by the Director of Elections and research, Mr. Evans Nimako stating the activities to be undertaken and corresponding dates for those activities. 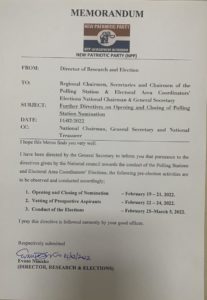