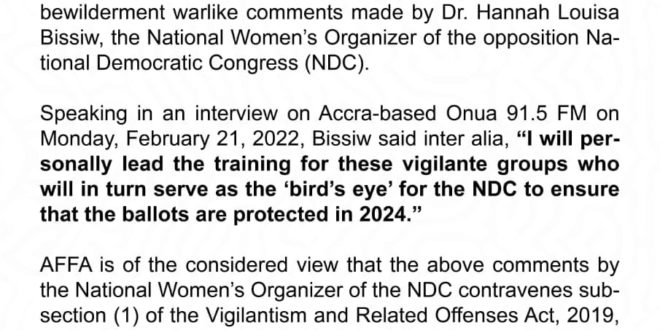 A group known as Alliance For Footsoldiers Advocacy (AFFA) has called for the arrest and prosecution of the National Women’s Organizer of the opposition National Democratic Congress (NDC), Dr. Hannah Louisa Bissiw, over what it says is her “warlike comments.”

Speaking in an interview on Accra-based Onua 91.5 FM on Monday, February 21, 2022, Dr Bissiw is reported to have said inter alia, “I will personally lead the training for these vigilante groups who will, in turn, serve as the ‘bird’s eye’ for the NDC to ensure that the ballots are protected in 2024.” 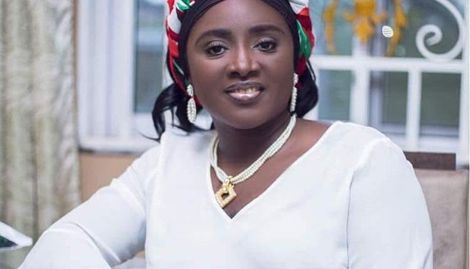 AFFA said is of the considered view that the above comments by the National Women’s Organizer of the NDC contravene subsection (1) of the Vigilantism and Related Offenses Act, 2019, (Act 999), and same must be dealt with in accordance with law.

“For the avoidance of doubt, section (3) of the Vigilantism and Related Offenses Act, Act 999 states, “(1) A person shall not directly or indirectly; (a) form, organize, operate or (b) promote the formation, organization, operation or activities of a vigilante group. Section (2) further adds, “A person who contravenes subsection (1) commits an offense and is liable on conviction to a term of imprisonment not less than ten years and not more than fifteen years.”

The advocacy group stressed that to the extent that Hannah Bissiw who is a former Member of Parliament for Tano South Constituency is heard promoting the formation of a vigilante group that has been outlawed in Ghana is a serious matter which cannot and must not be treated lightly.

“It is on the back of this that we invite the Ghana Police Service to initiate investigations and prosecution of this matter to serve as a deterrent to all misguided politicians. We finally call on peace-loving citizens, the clergy and civil society organizations to add their voices in condemning irresponsible and reprehensible utterances, including coup mongering which have characterized our airwaves lately to safeguard the peace and security of this nation.” the statement added.