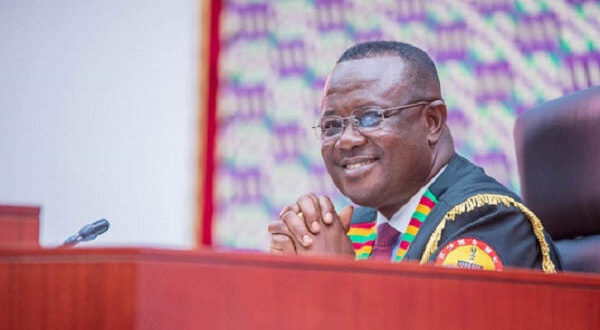 A seven-member Supreme Court panel presided over by Justice Jones Victor Mawulorm Dotse has set 9 March 2022 to rule in the case of Justice Abdulai versus Attorney General.

Justice Abdulai, a law lecturer at the University of Professional Studies (UPSA), is seeking a declaration that it is unconstitutional for the First Deputy Speaker of Parliament, Joseph Osei Owusu, to have counted himself for the purpose of making up the quorum of half of the Members of Parliament (MPs) required by Article 104 (1), when Parliament approved the 2022 Budget Statement and Economic Policy of Government on 30 November 2021.

The case of the plaintiff

The plaintiff in his statement of case is further saying that to the extent that the Deputy Speaker cannot be counted, the decision taken on 30 November 2021 to approve the 2022 Budget was a nullity.

According to the statement of case of the plaintiff, he is seeking a declaration that, “upon a true and proper interpretation of articles 102 and 104(1) of the 1992 Constitution, a Speaker or any other person presiding over Parliament cannot be said to be part of the members present for the purposes of decision making”.

He also wants a declaration that upon a true and proper interpretation of articles 102 and 104(1), the First and Second Deputy Speakers when presiding over Parliament have the same authority as the Speaker of Parliament and can therefore not be counted as Members of Parliament present for the purposes of taking a decision in accordance with Article 104(1) of the 1992 Constitution, and consequently claimed a declaration that the decision taken on November 30, 2021 to approve the 2022 Budget amounts to a nullity and is of no effect.

The Attorney General, in his statement of case opposing the arguments of the law lecturer indicate that a Deputy Speaker of Parliament or any member presiding over proceedings in the House in the absence of the Speaker, is entitled to be counted for the purpose of making up the quorum of half of the Members of Parliament (MPs) required by Article 104 (1) of the Constitution for the determination of matters in Parliament.

See also  Kotoka Airport: Airlines To Pay $3,500 On Each Unvaccinated Passenger They Bring In

He said further that a Deputy Speaker or any member presiding over proceedings in the House in the absence of the Speaker is entitled to cast a vote for the purpose of taking a decision in the House in accordance with Article 104(1) of the Constitution.

According to the AG, the view espoused by plaintiff suffers from a fundamental failure to distinguish between a “Speaker qua Speaker under the Constitution” and a “Member of Parliament who deputises for the Speaker” by virtue of articles 96 and 101.

The Attorney General submitted further that the plaintiff relied only upon a very narrow, literal and absurd construction of articles 96, 101, 102 and 104 of the constitution and thereby, failed to take account of the different kinds of quorums required for the different “businesses” of Parliament and the rationale therefore, which supports the AG’s view that in so far as decision making in Parliament is concerned, all Members of Parliament including a Deputy Speaker when presiding, are entitled to vote.

On the different kinds of quorum established by the constitution, Mr. Dame submitted that “it is clear from Article 102, that, for the ordinary business of Parliament, there must be a quorum of only one-third of all the Members of Parliament,” adding “given that Parliament presently is made up of 275 members, the quorum required for the conduct of its business is 92 MPs. On the clear wording of the provision, the person presiding is not counted as part of the quorum.

The AG then invited the court to take particular account of the words “person presiding” in Article 102, and held that, when the constitution deliberately meant to specifically exclude a Deputy Speaker or any person who at a material point in time is performing the role of Speaker, from being included in the reckoning of any number for any purpose in Parliament, it said so in unambiguous terms.

Mr. Dame submitted further that Article 102 is not the only provision of the constitution on “quorum”, and that, Article 104 is on the “voting procedure” in Parliament.

“The provision provides for the manner in which a decision on a matter is generally determined to have been made on a matter,” he said, adding “this is set at a majority of members present and voting.”

Thus, for the purposes of Article 104, i.e. taking a decision on any matter in Parliament, at least 138 members of all the Members of Parliament must be present and out of this number, a majority must have voted on the issue. Any other construction, will manifestly do unwarranted violence to the clear words of Article 104(1).”

“The obvious implication is that all Members of Parliament, including the Deputy Speakers, who are also first and foremost, Members of Parliament are to be counted among the 138 members, which is half of the 275 elected members required before a question may be put on an issue or decision may be made on a matter.

Further, the Deputy Speakers, who are also Members of Parliament, are not barred by any word in Article 104 from voting on an issue whether presiding over proceedings or not,” he submitted.

Dame submitted that a close examination of Article 104 discloses that the persons who are specifically excluded from voting in proceedings of Parliament are explicitly mentioned in that provision.

According to him, only two persons are prohibited from participating in any voting in the House, saying “the first person is, as Article 104(2) indicates, the Speaker of Parliament.”

The AG contended that “Article 104(2) should be properly construed to mean the Speaker qua Speaker, and not any other person who for the time being or on temporary basis, presides over the House but who has not been duly selected to be Speaker.”

He said the second class of persons Article 104 prohibits in the exercise of a voting right is stipulated in clause 5 of Article 104, saying this is “a member who is a party to or a partner in a firm which is a party to a contract with the Government shall declare his interest and shall not vote on any question relating to the contract.”

“Apart from these, no other Member of Parliament is prohibited from voting on an issue in Parliament.”

Mr. Dame asserted that the interpretation he urged on the court in relation to Article 104, i.e. to permit a Deputy Speaker to be counted as part of the quorum for decision on a matter in Parliament, and to permit him to exercise his right to vote, is consistent with the practice in other jurisdictions and cited examples from Africa, other parts of the world including the United States of America and Australia to support his position.

I'm Adwenpa-Hene |Blogger & Broadcaster Journalist. I am the CEO and manager of this noble website. I publish on Entertainment, Sports, Politics, Lifestyle, and Technology. You can also follow Us on : YouTube Channel - My Ghana Media TV, Facebook - MyghanaMedia TV , Twitter - @MyGhanamedia2 & Instagram - My Ghana Media TV. Email Address: [email protected] Contact Us: 0200818719
@@MyGhanamedia2
Previous GIJ Students & Staff To Report On Monday 28 February
Next It Is Illegal, Unconstitutional And Offensive For 1st Deputy Speaker To Overturn My Ruling – Alban Bagbin