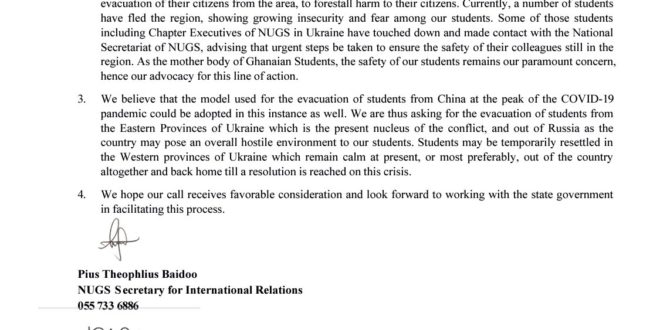 Spread the love
The National Union of Ghana Students (NUGs) appeals to the Government of Ghana to urgently take steps to evacuate Ghanaian Students from Ukraine and Russia following the declaration of a state of emergency by the Ukrainian Parliament and Russia’s “annexation”of Eastern Provinces of Ukraine.
Read the full statement below : 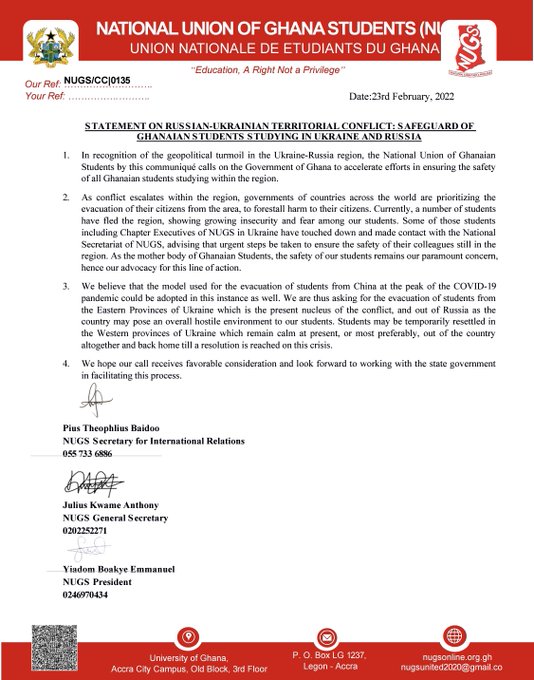 Ukraine announced plans Wednesday to declare a state of emergency, as the nation prepared to defend itself from an expected Russian invasion and fought off a new wave of cyberattacks that hit Ukrainian government and banking websites.

The 30-day state of emergency, subject to approval by parliament, would impose curfews and restrict mass gatherings in certain regions “if necessary” to confront increased Russian aggression, the chief of Ukraine’s National Security and Defense Council said. It follows a call-up of reservists as Ukraine braces for Russian President Vladimir Putin’s next moves.

When Russia invaded Ukraine in 2014, rebels backed by President Putin seized big swathes of the east and they have fought Ukraine’s army ever since. There was an international Minsk peace accord but the conflict continues and so Russia’s leader says he is sending in troops into two rebel-held areas. The UN Secretary-General has categorically rejected Russia’s use of the word peacekeepers.

The West believes Moscow is planning an imminent, new invasion of Ukraine, a country of 44 million people bordering both Russia and the European Union. For a start, there are reports of tanks arriving in separatist-controlled Donetsk and the latest satellite photos show Russian troops deployed within a short distance of Ukraine’s borders.

President Putin warned Ukraine it would be responsible for further bloodshed if it did not halt hostilities in the east. But there have already been a series of bogus incid

Reacting to a first wave of U.S. sanctions after Russian troops deployed into two pro-Moscow separatist regions of eastern Ukraine, Russia warned that Americans will fully feel the “consequences.” President Biden has acknowledged that the crisis could lead to higher gasoline prices, while U.S. businesses have been warned to prepare for possible cyberattacks.

See also  Oppong Nkrumah Claps Back: I Never Said All 16 Flagship Programs Including Free SHS Will Be Reviewed