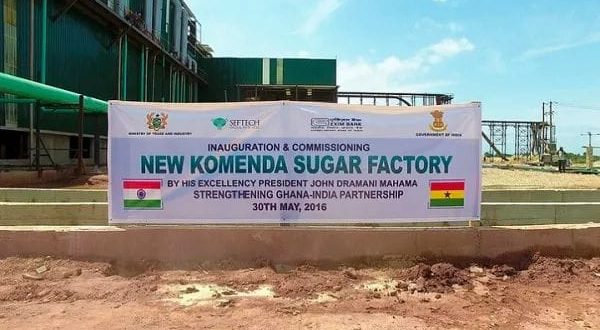 President Nana Addo Dankwa Akufo-Addo has assured the chiefs and people of Komenda that the controversial sugar factory will start production by April.

He said civil works on the project are scheduled to be completed by the end of March, assuring that production will begin the following month.

President Akufo-Addo gave this assurance on Wednesday, February 23 when some chiefs and elders from Komenda Traditional Area called on him at the Jubilee House in Accra.

He further assured them that despite the controversies surrounding the factory, particularly the claim by the previous government that work had completed before they left office, efforts have been put in to make it viable.

He said some 20,000-acre land has been leased at Wassa Fiase in the Western Region for the production of the raw materials for the factory.

Compensation, the President indicated, will also be given to those whose properties will be destroyed to make way for the road from the sugar cane plantation to the factory.

The $35 million factory, built from an Indian EXIM Bank facility, has not been in operation since its commissioning in 2016.

See also  Wereko-Brobby: The Most Terrible Thing Was To See Akufo-Addo’s Gov’t Close Down Radio Stations
Disclaimer: MyGhanaMedia is not responsible for this report and its content.There are four types of content published on MyGhanaMedia daily: curated content; syndicated content; user-generated content; and original content.