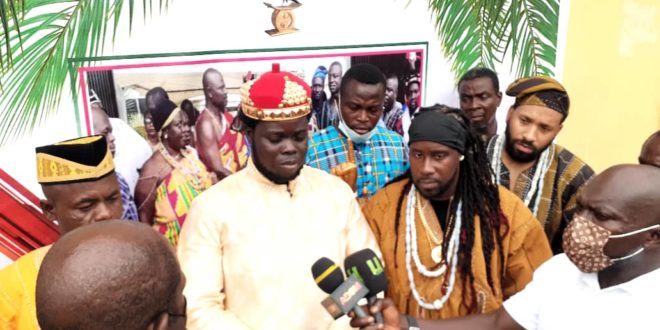 The Chief of Oblieman in the Ga West Municipality, His Majesty Nii Ayitey Anumle Oyanka I has fired an imposter Mustafa Ofoli Quaye who claims to be the head of the Tackie Oblie family for duping him an amount of Gh¢ 4,000 in 2014.

He noted that somewhere in 2014 in a family meeting at Dansoman Russia, a suburb of Accra a 6-panel family invited him to discuss matters of development for the Abola Piam Royal House and then requested money from him to be used in resolving a few leadership issues in the family after the death of Atta Adu Tackie Oblie former head of the said Tackie Oblie family.

King Oyanka added that the 27 member committee is chaired by himself and legally registered.

” Nobody had the mandate or power to dissolve it. I took about 7 fishermen from Abola Piam and installed them as sub-chiefs to represent some villages. These developments are evidenced in news publications and TV news broadcasting”.

Nii Oyanka Noted that He formed the council because of issues surrounding Ga-Dangbe traditional areas to help put an end to the many chieftaincy and land-related disputes in order to aid the development of Ga communities.

“After so many years of uncertainty and arguments of who is chief and who is not, who owns the land and who does not, we as a royal house have decided that it would be appropriate to form a council and different committees under the said council to oversee the resolution of the issues surrounding Ga-Dangbe traditional areas, especially issues under the Abola Piam royal jurisdiction,” Nii Oyanka I explained.

Nii Oyanka added that he has also accomplished the same Feat in Establishing Another Royal Council in Akyem Bosome Traditional Area of Anamase. He again noted that being a great royal descendant of the powerful Amazons Royal Warriors of The Benin Kingdom which ruled all the way to some part of the then Gold Coast Present Day Ghana. He sees it as one of his destiny mission and responsibility to champion the course of Traditional Development in Africa.

“There are several bigger and greater international positions which are higher and bigger than this local Councils and that he won’t tolerate some fools and illiterates who want to tarnish his image by publishing false news and making false allegations against him. I have been Civtek International Corporation West Africa Advisor 09/2017 to date A world-class global enterprise that is headquartered in America”.

” I also serve as the West African Chief Executive Officer for the World Human Rights Council which has its headquarters in India.

Am also Chairman of Council of International Chambers of Commerce for West for which I have gone on to establish African Founder for West and Ghana”.

King Oyanka warned that he does not like Physical fighting and brows. If you are ready to tarnish my image because u are paid to write nonsense about something which is not true, be ready to use the saved money for spiritual battles that will befall you.

I'm Adwenpa-Hene |Blogger & Broadcaster Journalist. I am the CEO and manager of this noble website. I publish on Entertainment, Sports, Politics, Lifestyle, and Technology. You can also follow Us on : YouTube Channel - My Ghana Media TV, Facebook - MyghanaMedia TV , Twitter - @MyGhanamedia2 & Instagram - My Ghana Media TV. Email Address: [email protected] Contact Us: 0200818719
@@MyGhanamedia2
Previous University of Cape Coast Resumes Academic Activities On Monday, 28th February
Next Ghanaian Students In Ukraine To Gov’t: ‘We Are Scared; Please Come For Us’