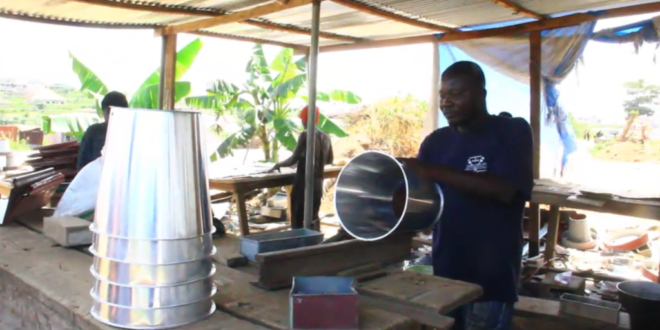 A 25-year-old senior high school graduate at Mampongteng in the Ashanti Region recounts how people, including members of his family, ridiculed him for venturing into a skilled trade.

According to Emmanuel Amanfo, most of his colleagues who also ridiculed him are now University graduates but cannot find jobs.

Emmanuel nearly quit the skilled trade because of the negative comments he received from people. But now, he says, he is happy.

Emmanuel failed to further his education to the tertiary level but now makes a living from his established business.

“When I was at Pankrono, those I was staying with had finished SHS and were furthering their education. They were wondering why an SHS graduate decided to be an artisan instead of furthering my education. I was punctual at work but because of continuous ridicule, I got fed up and stopped going for the training. My master usually called to enquire why I was not coming but I lied I was sick. Most of those who discouraged me are now University graduate but unemployed.

“They now see me as a better person than before. I went through a lot of challenges. Even some of my family members discouraged me but I stood my grounds and went back to learn. The work is not easy,” he said.

Emmanuel was a business student at Mpasatia Senior High Technical School. The course perhaps helped him to develop his business idea and entrepreneurial skills.

Emmanuel began his business two years ago, after five years of training. He raised 4000 cedis from the money he received from his master during the five-year training.

“I started with 4,000 cedis without support from anyone. With time, people buy our items. We get contracts from poultry farmers and they order in large quantities. That has helped my business to grow and our income has increased,” he indicated.

He makes coal pots, poultry feeding troughs, trunks, among others from materials like used zinc.

“We have people who supply us with the materials. Sometimes, if someone’s roofs his building, we buy the leftovers materials or waste. At times those who renovate their leaky roofs call us to buy the old materials,” he added.

“We deal with the orders from our customers. We can make 3,000 cedis a week and our profit is between 500 cedis and 1000. But sometimes sale can be business.”

The young entrepreneur has four apprentices and three casual workers, including one of his mates in senior high school. He pays them 50 cedis a day.

“We have seven people. Four are apprentices and three casual workers. Today, some of them didn’t come that’s why we are few. One of the guys was my SHS mates.”

The 25-year-old does not regret the decision to be an artisan.

Some mates of Emmanuel are now university graduates, some have learnt trade while others are still struggling with life.

“We sometimes meet as schoolmates. Some of us are progressing in life, others are graduates and the rest still struggle to make a living. But we’re happy when we all meet. Anytime there is monetary contribution, whatever amount the graduates give, I also contribute same. They’re about my business.”

Though Emmanuel would want to further his education, he doesn’t intend to do so now. “If I get the opportunity to further my education I will, but for now I haven’t planned for it. Because after school, you will still have to look for a job.  Now, I’m focusing on my business.”

His major fear is losing his current location.

“I pray that my business grows and I will be able to establish a factory.  Sometimes, parents bring their children to be trained but because of money issue among other, we are unable to engage them.

“For instance, the land isn’t mine.  If the owner comes, he will evacuate us. We have been evicted before from a piece of land. That’s the problem. We don’t have about 100,000 cedis to buy a land for the business.”

Emmanuel feels he has accomplished a great deal in life.

Instead of waiting for white-collar jobs, he urges young Ghanaians to buckle up and do something for themselves.

“In this modern world, you don’t have to rely on someone.  You don’t depend on government either.

Everyone should look for something meaningful to do to plan ahead of the future.”

Emmanuel Amanfo could probably keep going for a while on the benefits of learning to be a little more self-sufficient.