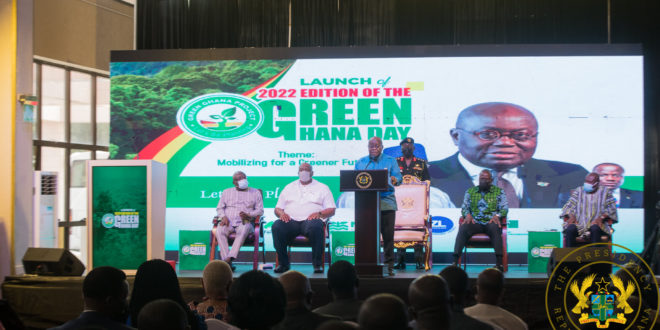 President Nana Addo Dankwa Akufo-Addo has declared June 10, 2022, as this year’s Green Ghana Day, under the theme “Mobilising for a Greener Future.” The President made the declaration at the Accra International Conference Centre on March 1, 2022, when he launched the 2022 edition of the Green Ghana Day.

The Green Ghana Day was instituted last year by Government, under the auspices of the Ministry of Lands and Natural Resources, as part of an aggressive afforestation and reforestation agenda, to restore the lost forest cover of the country.

The maiden edition of the Green Ghana Day was held on June 11, 2021, where the President led the entire nation to plant over seven million trees, exceeding the target of five million trees.

Speaking at the launch, the President said forest is one of the most important natural resources of our country, as it provides sources of livelihood for many and generates income for the nation.

He noted that the forest sector generated almost One Billion Ghana Cedis (GHS1,000,000,000.00) from the export last year.

The President said forests are also very important to the fight against climate change and the achievement of the Sustainable Development Goals. “With just eight years to achieve the Goals we set for ourselves in the Sustainable Development Goals, climate change continues to derail our efforts, by impacting the fundamentals required to the achieve the Goals,” the President observed.

He bemoaned the wanton depletion of the world’s forests, especially in Africa, where we continue to experience an increase in net forest loss. The President said a greener future is necessary for the survival of our planet, and in accord with the duty of every citizen under article 41(k) of the Constitution, to protect and safeguard the environment.

President Akufo-Addo said the 2022 edition of Green Ghana Day targets the planting of some twenty million (20,000,000) trees across the country. He called on all Ghanaians and residents of Ghana, to go out on June 10 to plant, encourage others to do same and commit to ensure that the trees planted reach maturity.

The President expressed his hope that people will contribute in diverse ways to ensure that the exercise does not burden the public purse.

On his part, the Minister for Lands and Natural Resources, Hon. Samuel A. Jinapor, MP, said, the country has lost over eight million hectares (8,000,000 ha) of forest since 1900, but managed to plant only one hundred and fifty-seven thousand three hundred hectares (157,300 ha) between 1963 and 2016.

He said as a result of Government’s aggressive afforestation programme, four hundred and seventy-seven thousand, four hundred and eighty-five point five hectares (477, 485.5 ha) of forest was cultivated between 2017 and the third quarter of 2021.

“Significant though this may be, it is not enough, compared to the over eight million hectares (8,000,000 ha) lost over the years,” the Minister said. He, therefore, called on people of all walks of life, to come together to build a Green Ghana.

Mr. Jinapor, called for the support of all and sundry, to contribute to the programme, as the twenty million trees target, is very ambitious and will require a lot of resources.

He added that the Ministry of Lands and Natural Resources, intends to pilot the concept of carbon trading with Corporate Ghana, during this year’s edition of Green Ghana.

I'm Adwenpa-Hene |Blogger & Broadcaster Journalist. I am the CEO and manager of this noble website. I publish on Entertainment, Sports, Politics, Lifestyle, and Technology. You can also follow Us on : YouTube Channel - My Ghana Media TV, Facebook - MyghanaMedia TV , Twitter - @MyGhanamedia2 & Instagram - My Ghana Media TV. Email Address: [email protected] Contact Us: 0200818719
@@MyGhanamedia2
Previous Alban Bagbin: If Coup Happens, It Is Parliament That Suffers, Not Judiciary Or The Executive
Next Ghana’s Economy At Crossroads: E-LEVY Or IMF?