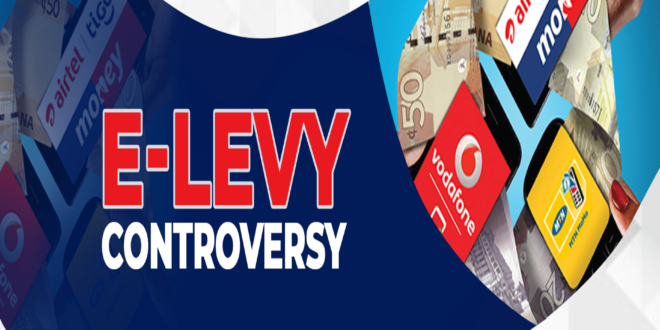 The Electronic Transaction Tax (E-Levy) has become a household name dominating the Ghanaian airspace in the last couple of weeks.

The government has so far done a lot in its bid to pass the levy but is met with strict resistance from the citizens and the opposition members of parliament amidst a weak economic outlook.

The recent warning by the speaker of parliament that the government may not be able to pay salaries in the next three months if something is not done calls for heads to roll to safe our economy. In this article, I share my candid opinion on these policies.

My basic elementary economics has taught me that governments mainly raise money from taxes and loans. In Ghana, the taxes however are collected from a very limited number of citizens about 60% of which goes into payment of salaries alone.

Servicing of interest on loans almost takes all the rest of the money. To this effect, government cannot resist borrowing to finance expenditure. Currently the economic outlook of the country is quite vulnerable making it difficult for the country to access loans from the international markets; it can only do so at a very costly price.

The situation is made worse by the negative credit ratings and the disturbances in the hung parliament that makes it uncertain the country’s ability to pay back these loans. Meanwhile, government cannot stop spending: servicing of debt, offsetting of maturing loans, payment of salaries, building roads among other expenditures that need to be made.

More so, the central bank unable to print more money as it has already printed so much (estimated Gh12 billion) to help in the financial sector clean up coupled with the rising inflation. The country must therefore try to mobilize enough funds internally to meet its expenditure or at best cut budget deficit to barest minimum which at the moment is really dire because the tax net is too small.

It may not be a good idea to put more taxes on the petroleum sector which is the biggest indirect tax item at least for now. This is because commercial drivers and car users are already hit hard by the current petroleum prices caused mainly by increased world market price and the struggling cedi against international currency.

Taxing this sector the more could also bring little economic impact due to the multiplier effect of inflation that will arise from increase transport fares: cause general price rise which is not good for an economy which is already bedridden.

Given this current economic conundrum, the government has two options to make:

1. To go to the IMF and get credit support which comes with a lot of restrictions and quite small annual funding. These restrctions include: retrenchment, reduced government spending which will cause a stop to almost all public expenditure including building and/or maintaining roads, agenda 111, free SHS etc. The government will be reluctant to take this option considering the level of unemployment and demostrations for government to build more public facilities and employ more people either directly or indirectly.

2. To widen the tax net more towards the informal sector by way of the e-levy. This will send good signals to the international market and bolter the economic ratings to positive directions to enable the government borrow at a good interest rate. The government may even decide to collateralize the e-levy funds to generate a lot of money (approximately $70 billion) for a 10 year period. This alone can stabilize the economy, minimize borrowing and increase our dollar reserves to halt the continuous depreciation of the cedi.

Many economists argue that e-levy is not a tax properly so-called because it is a distortionary policy that might further throw the economy off balance. In their view, there is no basis to be taxing transactions rather than actual income and economic gains. It is regressive and may engender significant changes in economic agents and hence detrimental to our economy.

I do share in the learned opinion of such economic think tanks; suffice to say that projected economic behaviours draw their rules from economic theories which are based on the assumption that certain variables are held constant. This may be far from reality because most at times, variables that might dictate the economic behaviours of most policies are not usually constant. It is because of this that I refuse the invitation to share economic comity with the presumption that the shortfalls of the e-levy will outlive its objectives. Definitely not!!

Undoubtedly, well meaning citizens pour out their frustrations citing economic mismanagement. They vehemently state that our current situation is borne out of overspending and corruption, the actors of which is the executive organ of government. Nobody needs a pointed gun at him no matter the political lens you wear to agree that the economic management team slipped.

It is trite that no government can resist borrowing but that must be matched closely with the size of your economy and the use that these loans are put into since this dictates your ability to manage your debt levels.

It is projected that considering government spending on covid 19 relief packages, free SHS, electioneering and its related activities ecetra, the 2020 budget might well have recorded a budget deficit of over 30%. This is so unacceptable for a small economy like Ghana which ought to maintain a budget deficit of single digits in order to keep growing. A debt to GDP ratio now lingering around 80% is not a joke.

Be as it may, let us refuse the temptation to put the blame squarely on the executive. The elected leaders act on our behalf since we vote for them based on their competence and the trust we have in their manifestos. The framers of the constitution anticipated the appetite of democratically elected leaders to abuse the use of the public purse entrusted in their care.

To cater for this, the constitution guarantees freedom of speech, the independence of the media, the office of the Auditor General, the Commission on Human Rights and Administrative Justice (CHRAJ) and the public accounts committee of parliament to whip the executive in line when it comes to the use of public funds.

If we as citizens allow all these means to remain impotent, then we must be ready to bear the wrath of economic mismanagement of any kind. The only means of last resort where the executive can be measured by the electorate is through the ballot box as succinctly advanced by Korsah CJ in RE: Akoto AND 7 Others (1961) GLR 523.

In summary, the country is at a crossroads: it does not know which way to go–e-levy or IMF. No matter how tough any of these options may be, the citizens must be ready to contribute their quota to bail the economy out.

The author is a student at the Faculty of Law at the Kwame Nkrumah University of Science and Technology. Views expressed in this article do not in any way represent those of the MyGhanaMedia.com 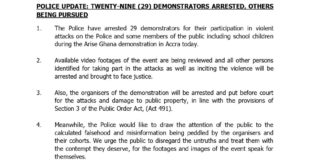