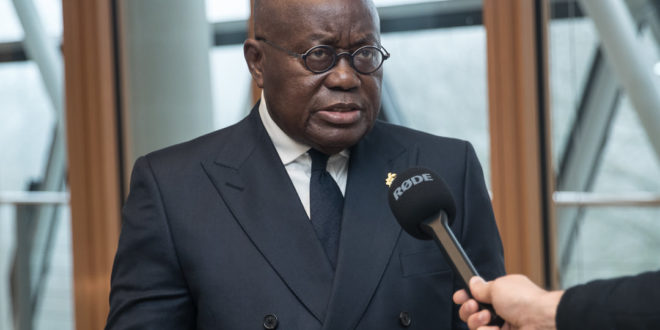 The President of Ghana,  Akufo-Addo has charged the newly elected leadership of the Pan African Youth Union (PYU), to do all within their mandate to insist on democratic governance in all African countries and to fight against military interventions and takeovers.

Addressing a delegation led by Pius Enam Hadzide, CEO of the National Youth Authority (NYA) at the Jubilee House on 2 March 2022, President Akufo-Addo said there are very serious issues confronting the African continent and it is only through the promotion of democratic responsibility that the continent’s challenges can to dealt with.

“The issues before our continent are well known; how to engender the peace and security of our continent, promote good governance, and of course, as a result, accelerate the development of our economies and improve the living standards of our people.”

“These are the main issues before us in our generation and you have been given a very important role in realising this vision of Africa’s future,” Akufo-Addo said.

President Akufo-Addo emphasised that the phenomenon of coups “did not bring us (the African continent), the progress that we should have had”.

He observed that having listened to the two leaders, Ahmed Bening Wiisichong, the newly elected Ghanaian born Secretary General of the PYU and Mumuni Diala, the President of the Pan African Union (PAU), he is fully persuaded that they will live up to the task.

“You will have the support of this government and myself personally in whatever you are doing so long as it is geared towards these goals” the President assured the delegation.

As part of the visit, leader of the delegation Pius Enam Hadzide, also presented to President Akufo-Addo, a citation conferring on him the Africa Peace Prize from the Youth of Africa for his efforts in promoting peace in West Africa and the continent as a whole.

In his brief remarks, Wiisichong, observed that President Akufo-Addo’s exemplary leadership on the continent of Africa, paved the way for his election to the high office of secretary general of the PYU.

“I will use this opportunity to congratulate you for providing leadership and for guiding us through this journey. We want to assure that we shall deliver on the mandate that we have been given in achieving the objectives of agenda 2063 and the Africa we want”

The Pan African Youth Union (UPJ/PYU), is the coordinating body for youth organizations at the national, regional and continental Africa.

There are competing regional and sub-regional organisations across Africa. The UPJ/PYU is a member of the International Coordination Meeting of Youth Organisations (ICYMO) and is recognised as the regional youth platform from Africa.

I'm Adwenpa-Hene |Blogger & Broadcaster Journalist. I am the CEO and manager of this noble website. I publish on Entertainment, Sports, Politics, Lifestyle, and Technology. You can also follow Us on : YouTube Channel - My Ghana Media TV, Facebook - MyghanaMedia TV , Twitter - @MyGhanamedia2 & Instagram - My Ghana Media TV. Email Address: [email protected] Contact Us: 0200818719
@@MyGhanamedia2
Previous Price Of Liquefied Petroleum Gas Goes Up By 5% From Today
Next Audio: MP For Dome-Kwabenya, Adwoa Safo Requests For Leave Extension Again