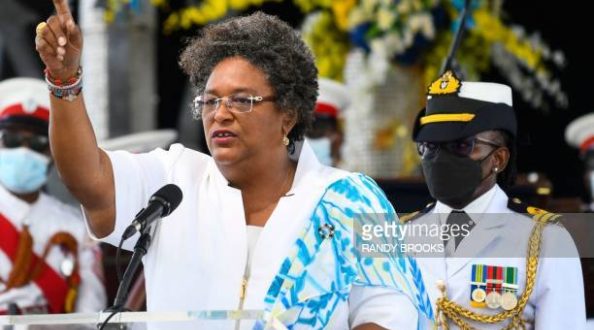 The Prime Minister of Barbados, Mia Amor Mottley has called on Ghanaians to mark 7th September as Africa-Caricom Day.

This is to celebrate the first-ever African Caribbean Summit as a path to stronger economic and social ties between the two global communities.

Speaking at Ghana’s 65th Independence anniversary, on Sunday, she noted that the first Africa-Caribbean summit which was organised at the behest of President Akufo-Addo and President Kenyatta of Kenya, saw the two international communities agreeing to establish a permanent forum where issues affecting both sides may be discussed.

“My friends out of that summit, we agreed to establish a permanent forum for African and Caribbean territories and states and that forum will be jointly coordinated by the African Union and the Caricom secretariat.

“We agreed also to take steps that the 7th of September shall forever be known as Africa-Caricom Day and we ask you our brothers and sisters in Ghana, as we will in Barbados, to celebrate that day with the knowledge that those of us across the Atlantic can never be divided not even by the forces of history or the passage of time,” she said.

She added that “The establishment of this forum will allow for us to bring about synergies between the Caricom’s single market economy and the Africa Continental Free Trade Area. And it is significant that in both of these instances, our two countries lead the effort. In your case the Africa continental free trade area and in the case of Barbados, the Caricom single market economy.”

Prime Minister Mottley noted that with Africa and the Caribbean region sharing similar challenges including the adverse effects of climate change, inequitable vaccine distribution among others, the forum will give participating countries a stronger voice to champion causes that affect them at the United Nations.

“We’ve also agreed that, that collaboration should be heard as we raise our voices against the inequity of vaccine distribution that has bedeviled our world as if there were truly first class and second class nations of the world. We reject that. We reject that.

“We ask ourselves to cooperate equally on the matters of the climate crisis and we do so conscious that each of us is affected,” she said.