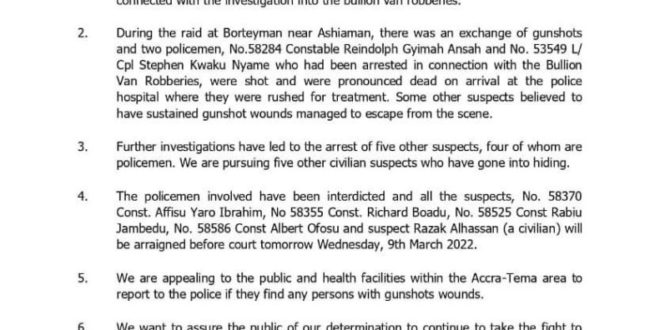 The Ghana Police Service has revealed that a total of 4 policemen have been arrested in connection with an “ongoing intelligence-led police investigation” into some bullion van robberies that recently occurred in the country.

Another suspect believed to be a civilian was also arrested by the police while some other 5 civilian suspects have gone into hiding according to the police.

The police in a statement also disclosed that a raid at Borteyman near Ashaiman also led to the death of two other police officers during an exchange of gunshots.

The two, according to the police, had earlier been arrested in connection with the bullion van robberies.

The police in a statement signed by the Director-General of Public Relations, DCOP Kwesi Ofori, said the arrested officers have all been interdicted and will be put before court on Wednesday, 9th March 2022.

“During the raid at Borteyman, near Ashaiman, there was an exchange of gunshots and two policemen, No. 58284 Constable Reindolph Ansah and No. 53549 Lance Corporal Stephen Kwaku Name who had been arrested in connection with the Bullion Van Robberies, were shot and were pronounced dead on arrival at the Police Hospital where they were rushed for treatment. Some other suspects believed to have sustained gunshot wounds managed to escape the scene.”

“Further investigations have led to the arrest of five other suspects, four of whom are policemen. We are pursuing five other civilian suspects who have gone into hiding”. Excerpts of the statement read.

Below is the full Police Statement:

The police have carried out an intelligence-led field raid at a hideout of the gang connected with the investigation into the bullion van robberies. 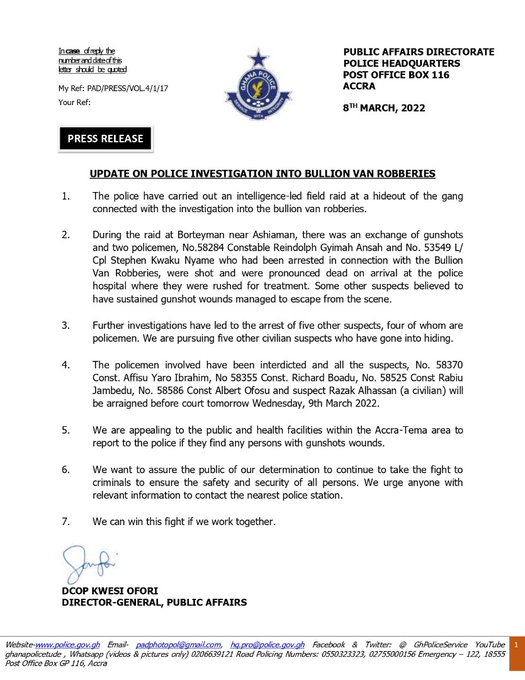 I'm Adwenpa-Hene |Blogger & Broadcaster Journalist. I am the CEO and manager of this noble website. I publish on Entertainment, Sports, Politics, Lifestyle, and Technology. You can also follow Us on : YouTube Channel - My Ghana Media TV, Facebook - MyghanaMedia TV , Twitter - @MyGhanamedia2 & Instagram - My Ghana Media TV. Email Address: [email protected] Contact Us: 0200818719
@@MyGhanamedia2
Previous Today’s Newspaper Headlines; Wednesday, 9th March, 2022
Next Ghana Would Not Be In This Mess If We Had A Female Finance Minister – Krachi West MP