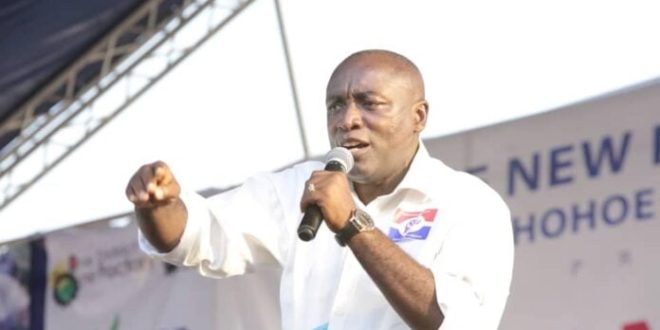 A former General Secretary of the New Patriotic Party (NPP), Kwabena Agyapong, says he has plans to lead the Party into the 2024 presidential elections.

According to him, he has attempted a run for the NPP leadership before and could run again.

“I think I will be a fine president. I have confidence I can do the job. Even when I was young, I thought it fit to give it a try; I’ve tried it before,” he said.

Speaking to Ayisha Ibrahim on PM Express Personality Profile, he stated that “it’s nothing that I can rule out, but this is not the time to discuss [because] we are in the second year of a second term. It’s about 200,000 delegates or so who are going to vote, so it’s not a very easy thing to swing.

“I am someone whose record in this Party is a longstanding, dedicated service from the Adu Boahene era, Kufuor through Akufo-Addo and Alan Kyeramanten… So I think it’s a matter of a public record, and the Party people know me; they know what I have done for the Party,” he said.

Meanwhile, he has cautioned persons in the Party who desire to succeed the incumbent leader against engaging in acts that distract the government in its governing mandate.

“What is important for me as a politician and as a party is that we should not disrespect the mandate that we have; we have a mandate to rule the country right now, and I think all of us, true patriots should be focused on helping the government deliver on that mandate.

“We shouldn’t come across as if we enjoy campaigning more than governing. Unfortunately, some of our colleagues are creating that kind of sad impression. The most important thing for us now as a political party is to win the confidence of the Ghanaian people,” he admonished.

Kwabena Agyapong served as NPP’s General Secretary until he was suspended by the Party in 2015 for misconduct but the suspension was lifted in 2021.