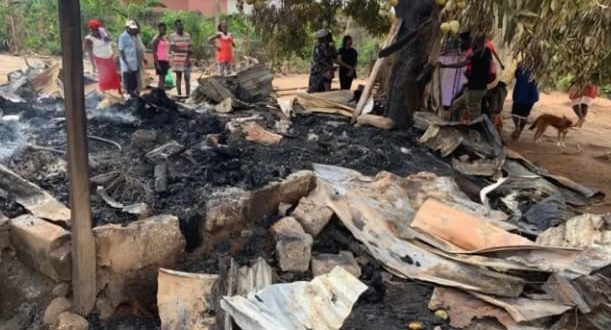 The Ghana National Fire Service (GNFS) has revealed that a man and his wife were killed after a fire consumed a structure they lived in at Gyinyaase in the Asokwa Municipality of the Ashanti Region.

Firefighters who rushed to the scene to battle the blaze said witnesses disclosed that the fire started just after midnight.

The crew, however, discovered the lifeless bodies of 51-year-old Godfred Afenyo, an electrician, and his 42-year-old wife, Happy Danso, after battling the blaze.

Narrating the incident, the eldest son of the deceased, Kingsley Asante said: “It was late in the night when I received a call from a friend. I decided not to answer, but the call came in several times, so I answered. When I picked, my friend broke the news to me. I took it as a dream because it was weird news. In my doubt, I received another call from my younger brother confirming my friend’s report.”

Firefighters have brought the situation under control.

“When we got to the scene the fire was well alight in a wooden structure used for domestic purposes and so when the fire was extinguished, we also realised that two people lost their lives”, a spokesperson for the Ghana National Fire Service DO III Peter Addai said.

The bodies were released to the police for preservation at the morgue.

Two including 90-year-old killed in another fire outbreak

The GNFS has also confirmed the death of two people at Mampong-Worakese in that same region.

The fire said to have started Friday dawn ravaged a five-bedroom house.

The charred bodies of the two victims – 90-year-old Madam Agyapomaa and Yaw Mensah, 11, – were later discovered moments after battling the huge blaze.

“The whole house got burnt. At the time fire personnel went to the scene the house was set alight… but we were able to extinguish it and at the end of the day two bodies were discovered and their bodies have been released to the police,” DO III Peter Addai said.

Residents in both towns are still in shock. Many thronged the scene to mourn with the bereaved family.

“We tried to save them but they got trapped,” a relative Afia Konadu told Asaase News amid tears. “We just have to leave everything to God.”

The GNFS said investigations have been launched into both bases.

I'm Adwenpa-Hene |Blogger & Broadcaster Journalist. I am the CEO and manager of this noble website. I publish on Entertainment, Sports, Politics, Lifestyle, and Technology. You can also follow Us on : YouTube Channel - My Ghana Media TV, Facebook - MyghanaMedia TV , Twitter - @MyGhanamedia2 & Instagram - My Ghana Media TV. Email Address: [email protected] Contact Us: 0200818719
@@MyGhanamedia2
Previous I Can’t Rule Out My Plans On Becoming A President – Kwabena Agyapong
Next Black Sherif Is Still With Us – Road Boys Association.