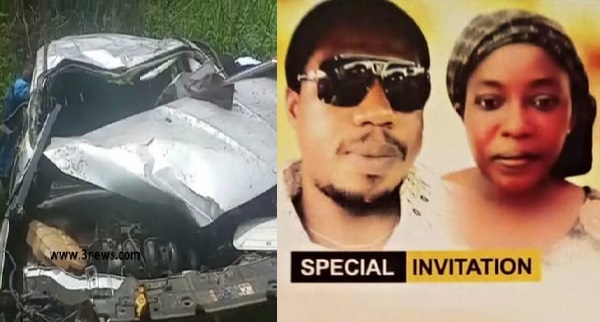 Ashanti Region: Groom Crashes To Death On Way To Wedding At Fumesua

What was to be a happiest day for a young couple turned out to be a nightmare for the bride.

Mohammed Zakari,  the groom, sadly lost his life in a car accident whilst on his way to his marriage ceremony ground on Sunday, March 13.

The unfortunate incident occurred at Fumesua on the Kumasi-Accra highway around 1:00pm.

Police say a Ford Escape vehicle with registration number AS 3222-21 being driven by the groom and occupied by four of his friends lost control and ran into a ditch.

The 40-year-old groom died on the spot. The four other occupants were rushed to KNUST Hospital for medical care.

One of the victims who sustained life-threatening injury has since been transferred to Komfo Anokye Teaching Hospital (KATH) for advance treatment.

Meanwhile, the bride has since been in coma after suffering from a traumatic shock.

The deceased has been buried, according to Islamic rites.

This latest accident adds to the alarming carnage on Ghana’s roads from over the weekend.

Some students of the University of Education, Winneba (UEW) died when the bus they were travelling in crashed into a stationary 40-footer container loaded with wood.

Between January and February this year, over 50 persons have died through road accident.

Source: 3news.com
See also  I Have Decided To Let Sleeping Dogs Lie – Muntaka Apologises For Bribery Claim Against Supreme Court Judge
Disclaimer: MyGhanaMedia is not responsible for this report and its content. There are four types of content published on MyGhanaMedia daily: curated content; syndicated content; user-generated content; and original content.