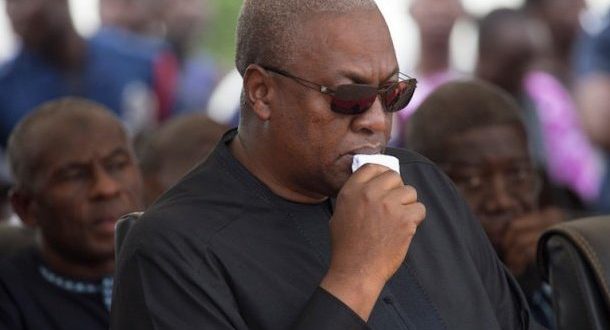 Former President John Dramani Mahama has paid tribute to the students of the University of Education, Winneba (UEW) over their sudden death following a road accident on Sunday.

The students were aboard a Hyundai universe commercial bus returning from an academic trip in Sunyani.

The bus with registration number AK 324-22 rammed into a stationary 40-footer container at Asuboi, near Suhum on the Accra-Kumasi stretch.

Nine students were initially reported to have lost their lives but the school’s authorities later confirmed only two students died as the bus picked a few other passengers on its way back from Sunyani.

Taking to Twitter on Monday morning, Mr Mahama stated: “What a sad waste of young lives in the Asuboi accident!!”

He cautioned drivers to exercise a little more restraint with the lives of citizens entrusted into their care.

“My condolences to the families of the dead, and speedy recovery to the injured,” he concluded.

What a sad waste of young lives in the Asuboi accident!!

Drivers of intercity coaches & public transport must exercise a little more caution with the lives of our citizens entrusted to their care.

Condolences to the families of the dead & speedy recovery to the injured. pic.twitter.com/nLt2WYl4iI