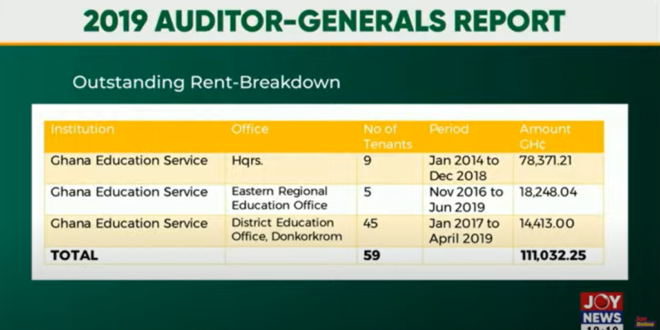 President of the National Association of Graduate Teachers (NAGRAT), Angel Carbonu has criticised the government’s directive for public sector workers living in public bungalows to pay 10 per cent of their salaries as rent.

Speaking to Mr. Angel Carbonu said the Association would engage the government on the directive since it lacks ‘in-depth thinking’.

Mr. Carbonu believes the 10 per cent rent charge on public workers living in public bungalows is unfair to public teachers.

“The directive is not scholarly. As for the Auditor- General, it deals with figures and numbers. They ought to be educated on the complexities of the situation in the Ghana Education Service, so that they can understand. Well, if they force the payment they would have to go and look for people to come and teach their children in the boarding houses,” he told Evans Mensah.

It would be recalled that the Finance Ministry in May, 2006 issued a circular for all public sector workers living in public bungalows to be charged 10 per cent of their salaries as rent payment.

The Ghana Education Service in the Western Region on March 11, 2022, per this directive from the Finance Ministry in 2006 directed all District Directors of Education and all heads of senior high schools to ensure that public sector workers living in public bungalows comply with the 10 per cent rent payment.

The statement added that all arrears since the issuance of the directive from the Finance Ministry are to be recovered.

But the NAGRAT President said the directive is ‘much ado about nothing’.

“When you take the total amount of money they are making and the people involved, this is just a drop in the ocean of the leakage that we experience within our public sector and again most of these public bungalows are being sold by government to individuals anyway in this country, so what is the noise about? Government on a daily basis is selling public bungalows to individuals, so when did public bungalows become this important to the government?” he asked.

The 2019 Auditor-General’s report indicated that for the outstanding rent in the Ghana Education Service (GES), there are 59 tenants who have defaulted the 10 percent rent payment.

Out of the number, 9 of the defaulters are from the Headquarters of the GES, 5 from the Eastern Regional Education office of the GES and 45 from the District Education Office in Donkorkrom.

The report also pointed out that a total amount of GH₵111,032.25 is owed as arrears by the Ghana Education Service as of 2019.