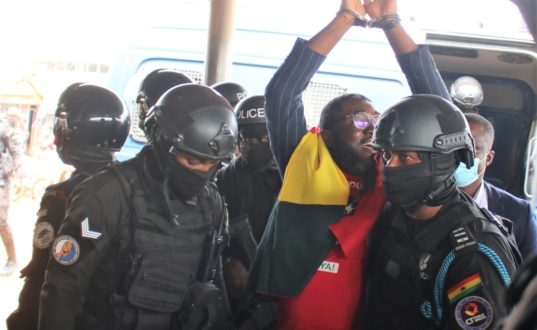 Convener for the #FixTheCountry movement, Oliver Barker-Vormawor has been granted bail by a Tema High Court.

The bail granted by Justice Daniel Mensah was to the tune of ¢2 million.

The Cambridge University PhD student is to provide 2 sureties one of whom should deposit documents to his landed property in execution of the bail.

The activist is facing treason felony charges after a social media post threatening a coup.

He is also required to report to the police once a week.

Mr Barker-Vormawor had, through his lawyers, assured the court he will show up to stand trial when needed despite the severity of the offence of Treason Felony leveled against him.

His lead Counsel, Akoto Ampaw told the court the case against his client is preposterous and not supported by any evidence. He insisted the constitution guarantees his client liberty and a right to be presumed innocent.

See also  Police: Shatta Wale Has Not Been Granted Bail

The court, he argued, has the discretion to grant bail in all matters and this discretion he pleaded should be exercised favorably since his client will cooperate with investigations.

He described as untrue claims by state prosecutors that his client has no fixed place of abode.

“He has led them to three locations. They have conducted searches there”, Mr Ampaw said.

Senior State Attorney Hilda Craig rebutted the claims. She described the youth activist as a lodger who lives with his friends when in the country and therefore has no fixed place of abode.

She told the court the state cannot trust him to show up if he’s granted bail. She dismissed claims that the case against the youth activist is not supported by evidence.

He’s facing the charge of treason felony for allegedly inciting members of his group to stage a coup.

He posted, “If this E-Levy passes after this cake bullshit, I will do the coup myself. Useless Army!”

In a subsequent post, he explained the context in which he used the word coup.

He was arrested on February 11 at the Kotoka International Airport, upon arriving from the United Kingdom.