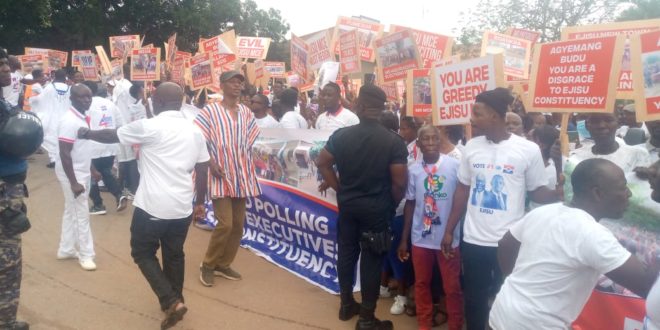 Over 200 members and  some elected polling station executives of the New Patriotic Party (NPP) in the Ejisu Constituency on Wednesday, March ,16 2022, dawn poured onto the streets of Ejisu to protest against the behavior of the Municipal Chief Executive (MCE) for the area, Mr Samuel Oduro Frimpong.

Wednesday’s march also targeted the Municipal Chief Executive (MCE) of Ejisu MCE, Samuel Oduro Frimpong, who is said to have masterminded the rejection of the polling station election.

The MCE is said to have claimed that there was no due process in the polls.

Some of the placards carried by the marchers read: ‘We don’t need Ejisu MCE’, ‘Mr MCE, are you blind?’ and ‘Mr MCE, You can’t see’, ‘Mr. President dismiss Ejisu MCE now’ 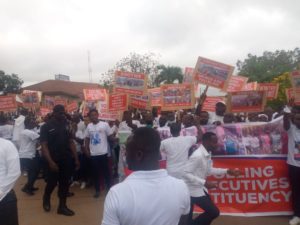 Spokesperson for the group and a member of the elected polling station executives in Ejisu, Kwabena Boateng, insists the elections were free and fair.

Mr Kwabena Boateng, said the MCE, a brother of an interested MP aspirant rather than focusing on his job was heard on radio speaking against the NPP and the conduct of the polling station election by the committee in charge.

This, the spokesperson said, was contrary to what happened in Ejisu where polling station elections were conducted freely and in the open.

He said every member who was interested in contesting for a position in the constituency had the opportunity to pick forms to do so.

‘’From the picking of nominations and also to the filing process, every aspirant was notified of the date and time elections would be held and I must say that nothing was shrouded in secret regarding the polling station elections’’, the spokesperson posited.

“On what basis is he seeking to impugn irregularities to an election that we conducted and say that the election is not an election properly so called. Even more serious is the fact that, as an MCE if you sit down and something is not going on well in the constituency, you have authority in the party, so why sit on a public platform and spew whatever you want to spew.”

The group demands the resignation of the MCE from office today if he does not provide evidence from the flawed election as he so claimed.

Failure to do so, the spokesperson said the group would continue to agitate for his sacking by appealing to the President. 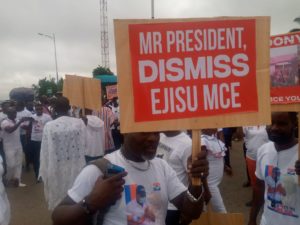 The group, the spokesperson noted, have realized that the MCE is doing what he is doing because his brother, Kwame Agyemang Budu, the Managing Director for the ECG is interested in the MP seat at Ejisu.

“The motivation which is driving the MCE to want to piss in and talk down on the peaceful elections the NPP had in Ejisu is to just muddy the waters and ensure fresh elections are done so his brother who is the ECG manager could infiltrate the party’s ranks with his favorites as polling station executives”, the spokesperson stated.

The procession was to refute claims that the recently held polling station election was illegally conducted.

Some aggrieved individuals had accused the election committee of holding polls in the night just to favor some party members, a claim which has been labelled as “malicious” by the Ejisu Constituency Acting Director of Election and Research, Dominic Dankwa.

Moreover, Abigail Boadi, the Women’s Organiser at Ejisu Essianimpong Polling Area, said “the election was conducted in the day time”.

She showed pictures as evidence.