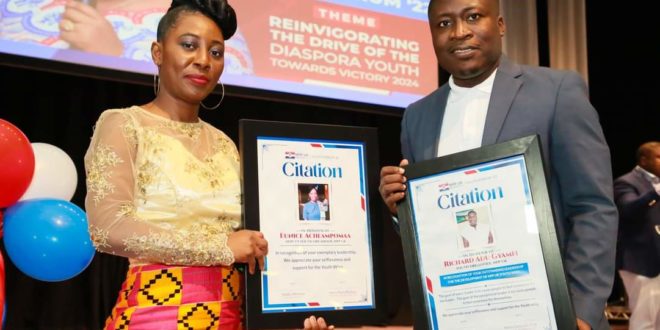 United Kingdom NPP-UK Youth Organiser, Richard Gyamfi, has called on the youth of the party to put their shoulders to the wheel and focus on winning political power for the NPP in the 2024 elections.

According to him, the NPP youth wing has so much talent that Ghana will be the ultimate benefactor should the party be given another mandate in the next elections.

He gave this charge over the weekend at the NPP Youth Forum held in the UK.

Harnessing talents “We have fantastic communicators. We have excellent mobilizers. We have talents who are innovators and creators.

I am reiterating this point to showcase the fact that our strength, if harnessed well, could lead us to win the battle ahead of us,” he indicated.

“The battle for election 2024 will be a fight for the soul of our nation and that of our party.

Achievements
He mentioned that the Youth wing of the party in UK has over the last four years chalked some successes including the University visitation project which saw the Youth Wing touring various universities across the United Kingdom leading to nearly 350 registered TESCON UK members.

“We have held several business-oriented meetings over the years. One such meeting was the collaboration with the State Housing Company which has resulted in business opportunities for some of our members,” he added.

He further stated that during the height of the pandemic, NPP UK, led by its Chairman Kwaku Nkansah, set up Covid fund to support the needy.

The Youth Wing leadership played instrumental roles amidst firm opposition to make sure some hard-done-by students benefited from that intervention.

See also  I Have Resigned From Forestry Commission - Charles Owusu