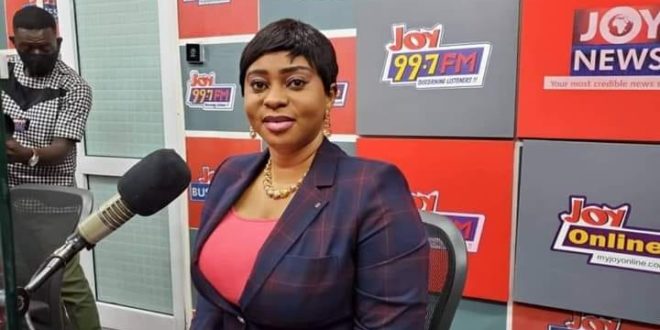 Audio: ‘Shame On You Adjoa Safo; Resign If You Can’t Do The Job’ – Majority Chief Whip Fumes

The Nsawam-Adoagyiri member of parliament said his colleague MP should bow her head in shame for frustrating government business in Parliament.

“She has no basis whatsoever to behave the way she is behaving, I have been quiet, tolerant and diplomatic about these whole happenings relative to Adwoa Safo, but the way it is going she is blackmailing the entire system which is most unfair,” he said.

In an interview with JoyNews’Evans Mensah on Friday, he lamented how the Gender Minister who has been on leave since August 31, 2021, is throwing a spanner in the works of government business knowing very well the 8th Parliament is hung.

“If the person decides to sabotage government and they care less about the effect of their action, it is difficult to control such a person,” he said.

Regarding reports that the former Deputy Majority Leader wants her position back amidst other demands, Mr. Annoh-Dompreh said he is unaware of any such demands since there is no official writing to confirm it.

“…I don’t know what else she wants when she has been made a Minister, what else do you want? Are you the only NPP member who has the credibility and competence to serve? She must bow down her head in shame. She is holding everybody to ransom and it is totally unacceptable,” he said.

The Nsawam-Adoagyiri MP said his countless efforts to reach her lately have been fruitless.

When asked what the Majority’s next line of action will be, he said, “I cannot spill the beans, we will do what we have to do, which is permissible within the law and the constitution and our Standing Orders. But people should know that there are other NPP MPs who would have to show responsibility because your people voted for you to represent them.

“To that end, if you are not doing that it is an indictment on you…if you know that you cannot prosecute that agenda, you might as well bow out honourably. There is a limit to what we can do,” the Majority Chief Whip said.

The Majority lacks the numbers they need currently to pass key policies like the Electronic Transaction (E-Levy) Bill, MPs like Adwoa Safo unwilling to play ball with the government.

The lawmaker has come under fire for neglecting her parliamentary duties amid speculations that she has vowed not to return until her demands are met.

Miss Adwoa Safo was last seen in Parliament in December 2021, when she appeared in the House to dismiss claims by the Minority Caucus that she was impersonated.

Her action has infuriated her colleagues who have accused her of blackmailing the government with a list of demands, including the Deputy Majority Leader post.

This has infuriated some colleague MPs and members of the NPP who are calling for her removal.

Play the audio below for more details  :

The First Deputy Speaker, Joseph Osei-Owusu has indicated that the Majority Caucus does not factor Dome-Kwabenya MP, Sarah Adwoa Safo, into its deliberations.

According to the Bekwai MP, all avenues to get the absentee MP to return to the House have proved futile.

As a result, the Majority in Parliament has resolved to conduct parliamentary business, going forward, without recourse to the Dome-Kwabenya MP.

Speaking on Kumasi-based Pure FM, Mr. Osei-Owusu said, “in our strategy, we have taken it as going to rescue a kidnapped person, you presume she is dead, but if you go and she is alive, then it is God’s grace, and it adds to your gains, so that is our approach.

“So as it stands now, we don’t count her as part of us,” he stated.

The governing New Patriotic Party (NPP) leadership has admitted that the Dome-Kwabenya MP’s absence is affecting the party and government business.

He also mentioned that the party is currently considering measures including triggering the constitutional provision to remove her as MP and declare her seat vacant.

I'm Adwenpa-Hene |Blogger & Broadcaster Journalist. I am the CEO and manager of this noble website. I publish on Entertainment, Sports, Politics, Lifestyle, and Technology. You can also follow Us on : YouTube Channel - My Ghana Media TV, Facebook - MyghanaMedia TV , Twitter - @MyGhanamedia2 & Instagram - My Ghana Media TV. Email Address: [email protected] Contact Us: 0200818719
@@MyGhanamedia2
Previous How People Are Financing Themselves In This Era Of COVID-19
Next Sam George To Communications Ministry, NCA: “Extend SIM Registration Deadline Or I Would Support Legal Action Against You”