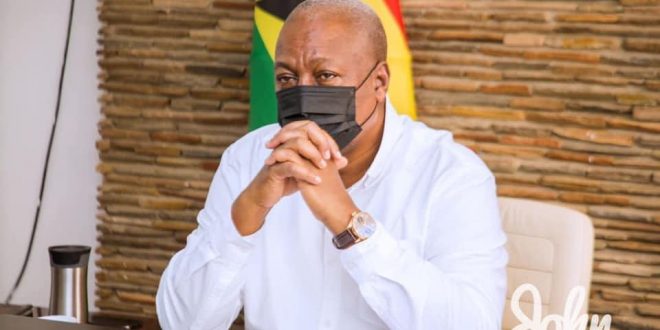 A private legal practitioner and plaintiff in the case that sought the Supreme Court’s interpretation on the voting rights of Deputy Speakers of Parliament when presiding,Justice Abdulai, has rendered an unqualified apology to former President John Dramani Mahama

The lawyer is alleged to have made some derogatory statements against the former President after Mr Mahama advised him to seek review over the verdict of the Supreme on the voting rights of Deputy Speakers but speaking on JoyNews’ Newsfile on Saturday, March 19, 2022, Justice Abdulai denied the claims.

“I’ll never disrespect former President Mahama so I’ll never use any derogatory words against him, not under any circumstance,” he said.

The former President had earlier described the 7-0 unanimous decision of the apex court that presiding deputy speakers had the right to vote as “regrettable” and said “I look forward to the applicant applying for a review of this ruling”.

Reacting to this in an interview on an Accra-based radio station, Justice Abdulai stated that “the former president cannot advise me on the law because he is not a lawyer.”

But the lawyer says that statement has been taken out of context.

“There have been rumours that I had snubbed President Mahama and I had even insulted and disrespected him. Some of these made it to the front pages of newspapers but these claims are untrue,” he said.

“I wouldn’t want to justify it by explaining it so I’ll rather render an unqualified apology to him. He’s a person I respect so much,” he said.

In spite of the apology, he stood his ground on his earlier assertions. “

I’m not apologizing for my comments but I’m apolosing for the mischief that has been created out of it,” he emphasized.

He also declared his intention to stay from publicly commenting on matters of national interest to avoid developments like this.

See also  You Are A Good Campaigner - Mahama To Akufo-Addo