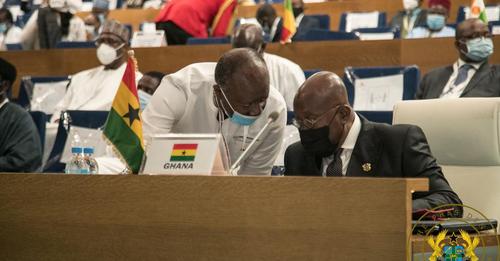 Government To Cut Salaries Of Appointees By Between 20% And 30%

The government could reduce the salaries of appointees by between 20% and 30%, Asaase radio understands from reliable sources.

Our sources say discussions of the proposal are ongoing and the outcome will be made public after a cabinet meeting today (21 March).

The move is to protect social interventions such as the School Feeding Programme.

According to the sources, critical among the matters under discussion is whether to maintain the 20% cut across the board or increase it.

Salaries of ministers, heads of state enterprises as well as heads of municipal and district assemblies will all be affected.
Call to slash salaries

Ransford Gyampo, an associate professor in the political science department of the University of Ghana, wrote an open letter recently calling on President Nana Akufo-Addo to reduce the size of his government and slash appointees’ salaries by 30%.

One measure to keep the economy running that the government announced earlier this year is that the treasury will reduce the allocation to metropolitan, municipal and district assemblies (MMDAs) for the first quarter of 2022 by roughly 20%.

In a tweet over the weekend, Gabby Asare Otchere-Darko, the political strategist called on the communications machinery of the Akufo-Addo administration to be more proactive in letting the public know certain measures the government has taken to “deal with the fiscal difficulties”.

“I am reading good suggestions on how to deal with the fiscal difficulties, like cutting down on govt expenditure. But, already spending is down by more than 20% and MDAs are feeling the pinch. The Presidency alone has cut expenditure down by over 30%. Govt must up its PR game!” Otchere-Darko wrote on Twitter on Saturday (19 March).

I'm Adwenpa-Hene |Blogger & Broadcaster Journalist. I am the CEO and manager of this noble website. I publish on Entertainment, Sports, Politics, Lifestyle, and Technology. You can also follow Us on : YouTube Channel - My Ghana Media TV, Facebook - MyghanaMedia TV , Twitter - @MyGhanamedia2 & Instagram - My Ghana Media TV. Email Address: [email protected] Contact Us: 0200818719
@@MyGhanamedia2
Previous Paga E/A Primary School : 11 Pupils Injured As school Walls Collapse On Them In Upper East
Next Bank of Ghana To Enforce ‘Drastic’ Measures In Banking Sector From April 1