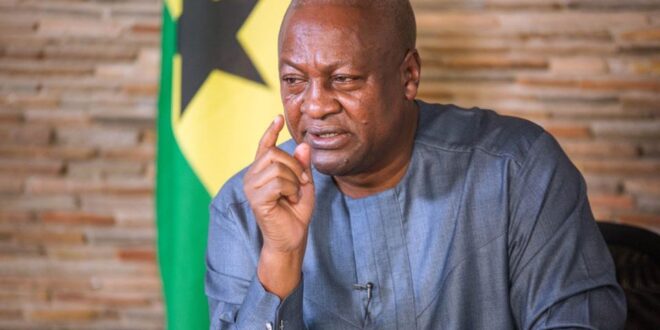 Former President of Ghana,  John Dramani Mahama has deplored the worsening socio-economic conditions in Ghana coupled with the persistently high levels of unemployment.

The West African nation has seen a surge in the prices of petroleum products at the pumps amidst increases in the cost of consumables and non-consumables on the market – while the local currency, Ghana Cedi has come under enormous pressure from the dollar and other foreign currencies – depreciating in value considerably in the last couple of months.

Speaking to teeming party supporters at an event in Accra on March 21, 2022, the former flagbearer of the opposition National Democratic Congress (NDC) said: “Ghana is currently experiencing the highest level of unemployment recorded in the fourth republic, at an estimated 14%.”

This fact-check report seeks to verify:

The latest statistics on the unemployed population in Ghana as captured in the 2021 Population and Housing Census by the Ghana Statistical Service (GSS).

An unemployed person is defined by the GSS to refer to a person 15 years or older who, in the seven days prior to the Census Night: Did not work or did not have work to go to; and was available to work.

According to Ghana’s current census, more than 1.55 million people or 13.4% of the country’s economically active population, are out of work – so it is inaccurate to suggest the unemployment rate is estimated at 14%.

In computing the unemployment rate, the 2021 PHC report used the relaxed unemployment definition which does not require that the person must be actively seeking work.

The two previous censuses (2010 and 2000) used the strict definition of unemployment which required that the individual must be seeking and available for employment.

On verifying whether the current unemployment rate is the highest in the fourth republic, GhanaFact referred to data from the World Bank.

Between 1991 and 2020, the worse unemployment rate of 10.46% was recorded in 2000, the World Bank data showed – with reference to the unemployment definition and methodology used by the Bretton Woods institution, it would be flawed to compare the historical statistics to the recent data released by the Ghana Statistical Service (GSS).

The World Bank clarifies the methodological differences in the way the unemployment rate was computed and defined unemployment as “the share of the labour force that is without work but available for and seeking employment.”

Ghana in 2014 started adopting the relaxed definition of unemployment – which does not require that the person must be actively seeking work – when the Ghana Statistical Service produced the Labour Force Report.

“The GSS has not yet gone back to do the recomputation using the relaxed definition. It is difficult to go back and recompute because the questions being used are quite different and you have to take into consideration the methodological differences,” Assistant Government Statistician in charge of labour statistics, Johnson Owusu Kagya told GhanaFact.

I'm Adwenpa-Hene |Blogger & Broadcaster Journalist. I am the CEO and manager of this noble website. I publish on Entertainment, Sports, Politics, Lifestyle, and Technology. You can also follow Us on : YouTube Channel - My Ghana Media TV, Facebook - MyghanaMedia TV , Twitter - @MyGhanamedia2 & Instagram - My Ghana Media TV. Email Address: [email protected] Contact Us: 0200818719
@@MyGhanamedia2
Previous January Allowance For NSS Personnel Paid; That Of February Will Come Soon’ – Management
Next Government To Pump $2bn Into Economy To Curb Cedi Depreciation