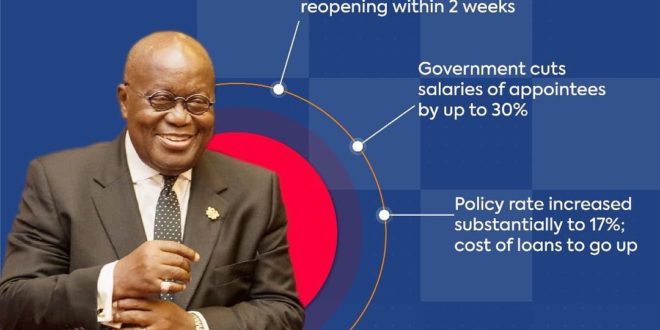 Government To Pump $2bn Into Economy To Curb Cedi Depreciation

The government has announced that it will pump an amount of $2 billion into the economy to curb the continuous depreciation of the cedi.

This forms part of measures by President Akufo-Addo to mitigate the hardships being experienced by the populace.

Amidst the growing depreciation of the cedi and the recent increments in fuel prices and prices of general goods, the government held a crunch cabinet meeting to find solutions to the raging economic challenges.

In a Facebook post on Wednesday, the Jubilee House highlighted four measures the government has approved during its cabinet meeting to cushion Ghanaians amidst the economic hardships.

These include; the reopening of the country’s land borders within two weeks, Government cuts salaries of appointees by up to 30%, the Bank of Ghana increases policy rate to 17% and the government to pump $2billion to rescue cedi.

Meanwhile, members of the Council of State have resolved to reduce their monthly allowances by 20% until the end of the year due to the country’s economic challenges.

According to the Chairman of the Council, Nana Otuo Serebour II, the move is to help them identify with Ghanaians amid the difficulties people are facing.

Speaking at the Jubilee House during a meeting with the President on Tuesday, he was hopeful “this small gesture will be emulated by other organs of government.”

“Mr. President, in tandem with your decision, we as the Council of State have also decided that we will reduce our monthly allowances by 20% until the end of this year. This move is our way of contributing our widow’s mite to our total efforts towards economic recovery,” he said.

Finance Minister Ken Ofori-Atta is expected to brief the country on Thursday, March 24, on the government’s measures to mitigate the current economic challenges confronting the country.

Many Ghanaians have lamented how the rising fuel prices, hikes in transport and food prices, and the depreciating cedi have compounded their cost of living.

On his part, President Akufo-Addo urged members of the public to await the decisions that would be announced by the Finance Minister.

“Fortunately for us, our retreat coincided with these difficulties and with the public anxiety about the way that the economy was going. It gave us, therefore, the opportunity of the three days to look in-depth about where the economy was headed and what measures were necessary to be taken.

“The decision was that the Minister for Finance is going to have a major engagement with the nation on Thursday where he is going to be in the position to layout specifically the measures that we have taken that we intend to take,” President Akufo-Addo said.