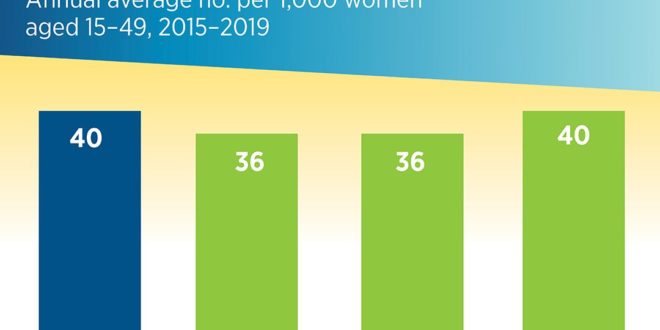 The first-ever model of unintended pregnancies and abortion rates for 150 countries has estimated that 266,000 abortions were done in Ghana between 2015 and 2019.

The study analyses rates from 2015 to 2019, with the aim of providing deeper insights into access to sexual and reproductive health services in countries of all income levels across the globe.

It said pregnancy outcomes in Ghana in 2015-2019 recorded a total of 1.33 million annually with 741,000 being unintended and 266,000 ending in abortion, which is legal only to preserve the pregnant person’s health.

Dr. Herminia Palacio, President and CEO of the Guttmacher Institute, said, “To build sexual and reproductive health policies that are truly inclusive and equitable, we need to understand what is happening at a country level.”

“Having current and reliable data at hand will not only help identify and find solutions to disparities but also make a case for smarter investments that deliver impact.”

Alongside the estimates, Guttmacher, a leading research and policy entity committed to advancing global sexual and reproductive health, has published more detailed country profiles to allow decision-makers and health advocates to better understand and act on sexual and reproductive health needs in their countries, particularly for family planning, including contraception and comprehensive abortion care.

The new estimates indicate that unintended pregnancy and abortion rates vary widely between countries—even within the same region or geographic area.

The greatest variations were found in Latin America and sub-Saharan Africa, where for instance, unintended pregnancy rates in countries ranged from 41 to 107 per 1000 women, and 49 to 145 per 1000 women respectively.

These disparities are not shaped purely by income level in Europe, for example, most countries with higher unintended pregnancy rates than the regional average are classified as high-income, while the two countries with the lowest estimates are middle-income.

This finding reflects how barriers to accessing and using effective sexual and reproductive healthcare exist in settings with greater as well as fewer resources.

“These variations speak to the need for investment, even in regions with low unintended pregnancy rates, that empowers women and girls across countries to choose under what circumstances they want to have children,” says Jonathan Bearak, a senior research scientist at Guttmacher Institute and lead author of the article.

“The proportion of unintended pregnancies ending in abortion—as great as 68 per cent, even among countries that completely prohibited abortion—illustrates the strength of the desire of millions of women and adolescents to avoid unplanned childbearing.”

With additional investments in country data collection, it would be possible to make estimates with greater certainty, monitor trends and possibly assess the impact of large-scale programmes in the future.

Sexual and reproductive health and rights are an essential part of universal health coverage and are required to end discrimination against women and girls. These country-level estimates highlight the importance of equitable investment in comprehensive sexual and reproductive health care, and will further inform countries working to implement WHO’s new guidelines for quality abortion services.

“This research aims to support countries as they work to strengthen the life-saving services they provide for sexual and reproductive health and improve health outcomes – especially for women and girls.”