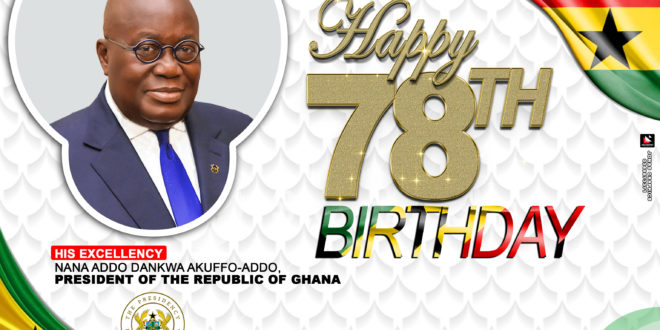 Sir John Pour In Goodwill Message As Ghana And Beyond Celebrate The Iconic Leader, Akufo-Addo.

Countless goodwill messages have been pouring in from different angles; family, friends, groups and institutions in Ghana and beyond.

In a message signed by Mr. John Kwame Duodu, he wishes President Nana Addo great anointing, grace, mercy, and favor of God. describing the president as “God’s special gift to Ghana at this point in time”.

Sir John stated that “today marks the beginning of another level of a breakthrough for Ghana”.

According to Sir John, H.E Nana Addo Dankwa Akufo-Addo has a heart of gold and is always ready to serve the people of Ghana.

You will undoubtedly overcome the current economic changes brought about by COVID-19 and the NDC government, propelling Ghana to its promised land.  Yes, you can do all things through Christ who strengthens you.”

He also prayed that God grant him [President Akufo-Addo] divine guidance, wisdom, and good health so that he can fulfill his country’s dreams.

May Almighty God continue to bless you, Mr. President, and grant you good health and long life. May He grant you great wisdom as you work to realize your progressive vision for mother Ghana.

God bless you the president of the Republic of Ghana and your household. 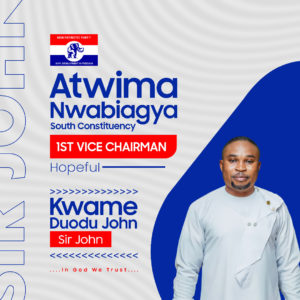 Akufo-Addo was born and raised in Accra, the son of Edward and Adeline Akufo-Addo. He received his primary education in Accra, first attending the Government Boys School and then Rowe Road School. Akufo-Addo went on to the United Kingdom for his secondary education, studying at Lancing College (1957–61). He came back home to Ghana and in 1964 began attending the University of Ghana, graduating with a bachelor’s degree in economics in 1967. Akufo-Addo returned to the U.K. to study law and was called to the bar in England (Middle Temple) in 1971 and in Ghana in 1975. He worked in France at the Paris office of the U.S. law firm Coudert Brothers from 1971 to 1975. He then returned to Ghana and from 1975 to 1979 worked in the chambers of U.V. Campbell. In 1979 he co-founded the law firm Akufo-Addo, Prempeh & Co.

Among Akufo-Addo’s family members who figured prominently in Ghana’s pursuit of independence and thereafter in public service were his father, who served as ceremonial president from 1970 to 1972, his great-uncle, the nationalist J.B. Danquah, and his uncle, William Ofori Atta. Akufo-Addo also was engaged in political activism. In the late 1970s he served as general secretary of the People’s Movement for Freedom and Justice (PMFJ), a group that opposed the plans of the military government in place at the time. In 1992 he joined the nascent New Patriotic Party (NPP) and served as a member of Parliament under the party’s banner for three terms (1996–2008). Under Pres. John Kufuor, Akufo-Addo served as attorney general and minister of justice from 2001 until 2003. That year he became foreign minister, a position he held until 2007 when he resigned in order to stand in the contest to be the NPP’s flag bearer in the 2008 presidential election; he was elected as the party’s candidate.

On December 7, 2008, Ghanaian presidential election, Akufo-Addo won the first round of voting with more than 49 percent of the vote. However, as he did not take the requisite 50 percent plus one, he and his closet challenger, John Evans Atta Mills of the National Democratic Congress (NDC), advanced to a second round, held on December 28. This time Akufo-Addo was narrowly defeated by Mills, taking 49.77 percent of the vote to Mills’s 50.23 percent.

Akufo-Addo stood for president on December 7, 2012, election again as the NPP’s candidate. He faced the NDC’s John Mahama, who had succeeded to the presidency earlier that year after Mills’s unexpected death, and six other contenders. Mahama was announced the winner, with 50.7 percent and with Akufo-Addo coming in a very close second with 47.7 percent. However, Akufo-Addo and the NPP lodged allegations of electoral fraud and challenged the results at the Supreme Court. After several tense months, in August 2013 the Court upheld Mahama’s victory. Akufo-Addo accepted the outcome and urged his supporters to do the same; he was lauded for his response to the ruling, which helped diffuse tensions in the country.

In 2016 Akufo-Addo stood as the NPP presidential candidate for the third time. He again faced Mahama—as well as five other candidates—in the election, which was held on December 7. This time Akufo-Addo was declared the winner, with about 53.8 percent of the vote, and Mahama, who trailed him with about 44.4 percent, conceded. Akufo-Addo was inaugurated on January 7, 2017.

Akufo-Addo had inherited economic problems, partly due to a depression of global prices on Ghana’s key commodities, burgeoning public wage costs, and increasing debt. During the first year of his term, he implemented one of his signature campaign promises, launching a program to put a factory in each of the country’s more than 200 districts. Also in 2017 Akufo-Addo rolled out a program to provide free senior secondary education. In 2018 he appointed a special prosecutor to tackle the long-standing issue of corruption. Although Ghana’s economy grew under Akufo-Addo, progress was interrupted by the impact of the COVID-19 pandemic in 2020.

The country’s next presidential election was held on December 7, 2020. Akufo-Addo, who again faced Mahama, as well as 10 other candidates, was reelected outright in the first round of voting, with slightly more than 51 percent of the vote. Mahama, who closely trailed him with about 47 percent, disputed the election results and filed a petition at the Supreme Court, but it was rejected in March 2021. Meanwhile Akufo-Addo was sworn in for his second term on January 7, 2021.